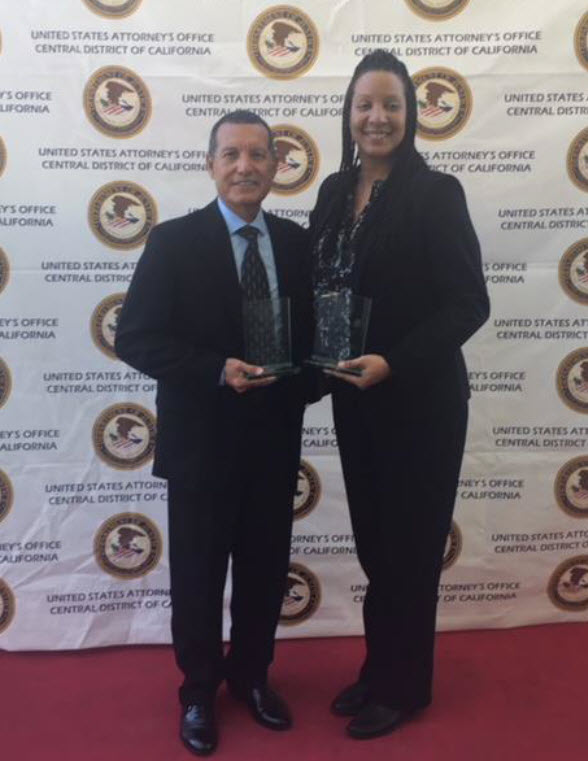 LOS ANGELES -  Congratulations to California Department of Insurance Detective Kimberly Johnson for earning recognition by the United States Attorney’s Office for her role in a decade-long investigation that uncovered health insurance fraud committed by a Rancho Mirage cosmetic surgeon.

Johnson, a member of the California Statewide Law Enforcement Association (CSLEA) and the California Association of Criminal Investigators (CACI) was one of more than 200 members of law enforcement agencies recognized for their outstanding work in numerous cases prosecuted by the U.S. Attorney’s Office.  The office’s annual Law Enforcement Awards ceremony was held Friday, November 2, 2018 at the Los Angeles Police Department Ronald F. Deaton Civic Auditorium.

“We are extremely proud of Detective Johnson and expect that she is very deserving of this award,” said CSLEA President Alan Barcelona.  “Thank you, Detective Johnson, for investigating the often lengthy and complicated cases of insurance fraud.  Job well done!”

Johnson was honored for her work in United States v. David Morrow:

“A decade-long investigation by these agents and detectives uncovered that Dr. David Morrow, a Rancho Mirage cosmetic surgeon, had duped health insurance companies into paying tens of millions of dollars for cosmetic procedures. Morrow billed more than $80 million in tummy tucks, breast augmentations, and ‘nose jobs’ to insurance companies, falsely claiming they were medically necessary. Morrow also altered medical records to conceal the fraud scheme. After pleading guilty, Morrow became a fugitive pending sentencing. In late 2017, Morrow was sentenced in absentia to 20 years in prison and ordered to pay $14 million restitution. Knowing this investigative team, Dr. Morrow will soon be back in the United States to serve his sentence at a secure federal penitentiary.”

The award was presented to Kimberly and others who investigated this case “In recognition of your distinguished service, integrity and commitment to the people of the United States of America.”

U.S. Attorney Nick Hanna said, “We are eternally grateful for the hard work and sacrifice given by these members of law enforcement. Every one of the honorees serves as a prime example of the outstanding commitment shown by every law enforcement officer who serves the public.”