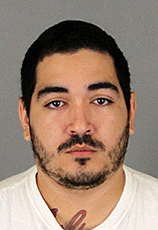 LAKE ELSINORE - On November 6, 2018, the Riverside Auto-Theft Interdiction Detail (R.A.I.D.) arrived at a residence in the city of Lake Elsinore to conduct a probation search and follow-up investigation related to auto-theft suspect Ernesto Valenzuela Beltran, 26.

During an initial search of the residence, R.A.I.D. discovered a large amount of powdered heroin inside a bedroom.  R.A.I.D.’s investigation led to a second home in the city of Perris where a search warrant was served.   RAID recovered a total of 19 pounds of heroin from both residences, with an approximate street value of more than $1,000,000.  Evidence of narcotics sales, and a large amount of cash, were also seized.

Ernesto Beltran and his brother, Luis Valenzuela Beltran, 24, were both arrested for various felony charges related to possession of heroin for sales.

According to the Riverside County Sheriff’s Department: R.A.I.D.’s primary mission is to investigate, arrest and prosecute criminals responsible for auto-theft.  However, this investigation is an example of the connection between auto-theft and other major crimes.  Auto-theft suspects are frequently involved in additional criminal behavior to include weapons possession, narcotics trafficking, and other violent crimes which impact the community.  The R.A.I.D. task force is committed to aggressively investigating all crimes associated with auto-theft.

“This is an example of some of the work our law enforcement members do as they are assigned to local task forces,” said California Statewide Law Enforcement Association (CSLEA) President Alan Barcelona.  “Undercover work dealing with all kinds of criminal elements.  We are proud of their law enforcement work and their dedication to keeping us safe.”