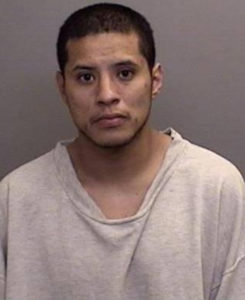 UKIAH -  On December 12, 2018,  a Mendocino County Superior Court jury found Oscar Alvarez Carrillo, 30, of Ukiah, guilty of the premeditated and deliberate murder of a next door neighbor, Salvador "Sal" Hernandez. The jury also found true the charged enhancement that the defendant used a knife in the commission of the murder.

According to testimony by a forensic pathologist, the victim suffered eight stab wounds and at least 67 incised wounds during the fatal attack in April 2016.

Carrillo will be back in court on December 20, 2018 for the setting of a future sentencing hearing. The first-degree murder conviction carries a mandatory state prison sentence of 25 years-to-life. The use of the knife enhancement carries an additional one year.

The law enforcement agencies that investigated and gathered the evidence which supported the jury’s conviction were the Mendocino County Sheriff's Office, the primary investigatory agency, with support from the California Department of Justice crime laboratories in Eureka, Redding, and Sacramento and the District Attorney's own investigators.

“Criminalists and senior criminalists in the California Department of Justice Crime labs provide invaluable services to counties such as Mendocino,” said California Statewide Law Enforcement Association (CSLEA) President Alan Barcelona.  “From crime scene response, to forensic science, to testifying in court – these professionals are a true might behind public safety and criminal justice.”

The prosecutor who prepared this case for trial and presented the People's evidence to the jury was Deputy District Attorney Scott McMenomey.