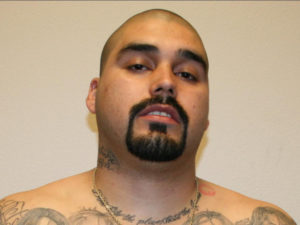 MODESTO-  Two gang members in Modesto will serve prison time for the July 4, 2009 drive-by shooting at a family’s barbecue that killed one person and injured two others.

On March 28, 2019 a jury found Abel Rodriguez, Jr., 35, of Ceres, guilty of first-degree murder and two counts of attempted murder with firearm and gang enhancements.

Rodriguez was the driver and shooter.  His accomplice, Pedro Alvarez, 29, of Ceres, a front seat passenger plead no contest on April 2, 2019 to aiding and abetting.

The shooting: On July 4, 2009 at approximately 9:50 p.m., Rodriguez and Alvarez, both gang members, were hanging out in Modesto when another fellow gang member drove up and indicated that there were rival gang members a couple blocks away.

Rodriguez and Alvarez decided to check it out.  Rodriguez drove his girlfriend’s car to the place with a handgun modified to be a fully automatic machine gun on his lap. He saw a family gathering, rolled down his driver’s side window, turned off his headlights, and slowed down to a stop in front of the party. Rodriguez then fired his machine gun into the crowd shooting three people, killing an innocent bystander, who was a migrant laborer.

Within minutes, Stanislaus County Sheriff’s deputies spotted Rodriguez’s car. Rodriguez fled at speeds in excess of 125 mph while his passenger threw the handgun out the window.  Rodriguez crashed into an embankment which immobilized his car. Deputies arrested both Rodriguez and Alavarez and recovered the handgun, 1 shell casing in the vehicle and 12 shell casings at the scene of the shooting. Rodriguez had gunshot residue on his hands indicating that he had recently fired a gun. A Department of Justice criminalist determined that the 12 shell casings from the scene of the shooting matched the shell casing that was located in the vehicle. Further analysis revealed that all 13 shell casings were fired from the Rodriguez’s handgun.

The jury did not find credible the testimony by a defense gang expert, who was paid $10,000 for his testimony to insinuate that another person was responsible for the shooting.

“It appears the evidence was key in the conviction of Rodriguez and that should make all of us grateful that we have California Department of Justice criminalists working every day in DOJ crime labs throughout the state to process and test evidence that leads to convictions and/or exonerations.  Evidence doesn’t lie and law enforcement and criminal justice professionals rely heavily on the scientific work of criminalists to solve and prosecute cases.”