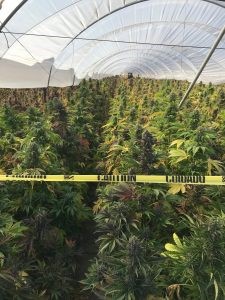 SANTA BARBARA - On June 17, 2019, detectives from the Santa Barbara County Sheriff’s Cannabis Compliance Team executed four search warrants related to an illegal cannabis cultivation site outside the City of Buellton. The warrants were the culmination of a two-month investigation involving fraudulently obtained State temporary and provisional cannabis licenses and the suspected sales of undocumented cannabis.

The search warrants took place in:

The cultivation area was located on a 187 acres of agricultural land with just about 60 acres of it used for the commercial cultivation of cannabis. From the initial investigation, it appeared the site was used to continually cultivate cannabis throughout the year and at the time of the search, approximately 40 acres was presently growing, with a large amount having been recently harvested. It took a total of four days for the team to seize approximately 20 tons of processed cannabis and eradicate approximately 350,000 cannabis plants, several of which were nearly ready to harvest. 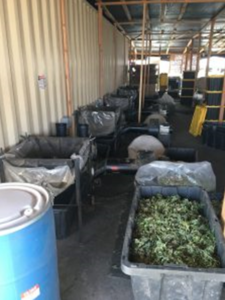 “With the legalization of cannabis in California, law enforcement is tasked with making sure operations are legal and licenses to operate are legally obtained,” said California Statewide Law Enforcement Association (CSLEA) President Alan Barcelona.  “This protects legal cannabis operations and also fish, wildlife and the environment – as often chemicals used to grow marijuana is not disposed of properly.”

This investigation was the result of complaints from the public, tips and information provided to the Sheriff’s Cannabis Compliance Team. The owner of the property had not been located or contacted, and the case will be forwarded to the Santa Barbara County District Attorney’s Office for review of criminal charges.