CSLEA Member Grateful for Successful Defense in Wrongful Termination “I would not have been able to get through this challenge without CSLEA.” – CSLEA Member Socorro Tongco

SACRAMENTO – When California state worker Socorro Tongco was fired from her job prior to Christmas of last year, her world quickly turned upside down.  How could she, an employee with good performance reviews up until the time she honestly answered questions about her employer during an investigation by the state auditor’s office, be terminated?

As a member of the California Statewide Law Enforcement Association (CSLEA), Tongco knew exactly where to turn.  She called upon CSLEA’s proven legal team for guidance, assistance and legal defense.

“I am an experienced performance management investigator and never thought I would find myself in a position of needing representation,” said Tongco, a former special investigator with the Department of Industrial Relations (DIR).

Tongco was legally obligated to participate in an audit of DIRs’ and its former director’s hiring practices. After the director was made aware of the allegations against her, she directed managers to identify the witnesses against her. An administrative investigation was then initiated against Tongco who was ultimately dismissed from employment.  CSLEA represented Tongco in the administrative investigation and proceedings before the State Personnel Board (SPB) and facilitated representation by a private law firm which filed a civil complaint against DIR and several individual defendants for whistleblower retaliation.  This week the SPB approved a mediated civil settlement which compensated Tongco for the loss of employment. 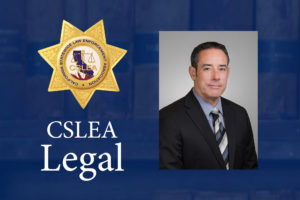 “Kasey Clark’s attention to detail and focus were simply unparalleled,” said Tongco.  “I would not have been able to get through this challenge without CSLEA. I cannot stress enough the importance of union membership”