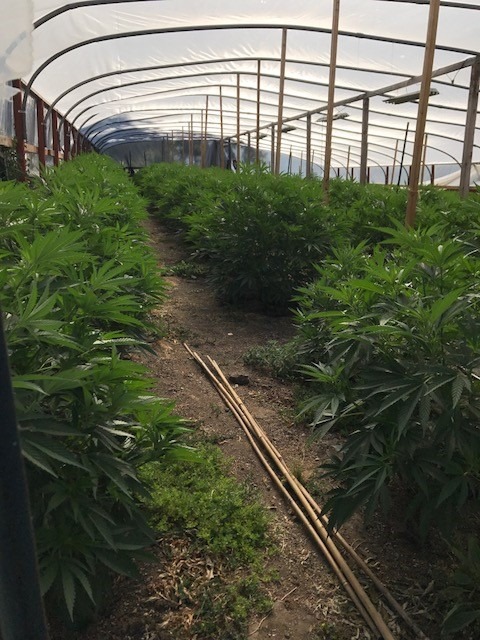 SAN ANDREAS - On July 9, 2019, a California Department of Fish and Wildlife (CDFW) officer assisted the Calaveras County Sheriff’s Office Marijuana Enforcement Unit in serving a search warrant at a home east of San Andreas. During the service of the warrant, 399 marijuana plants were seized and destroyed from two “hoop house” structures which were located on the property.

“Local law enforcement officers often call upon CDFW wardens to assist them in these types of cases because they have the environmental expertise needed to charge some of these individuals. Illegal marijuana growers often cause harm to nearby water ways and to the fish, birds, and wildlife nearby,” said California Statewide Law Enforcement Association (CSLEA) President Alan Barcelona.

The structures containing the marijuana were situated directly above a seasonal creek which was actively flowing. One structure was less than 20 feet from the creek, and ditches had been cut into the hillside to allow excess water from the growing operation to flow directly into the creek. Although no illegal pesticides were discovered, the plants did appear to be heavy treated with fertilizers.
Investigators also discovered that a ditch had been dug which led from a pile of white powdery substance into the creek.No one was arrested or present at the site during the service of the warrant, however, items of identification were collected, and the investigation continues.