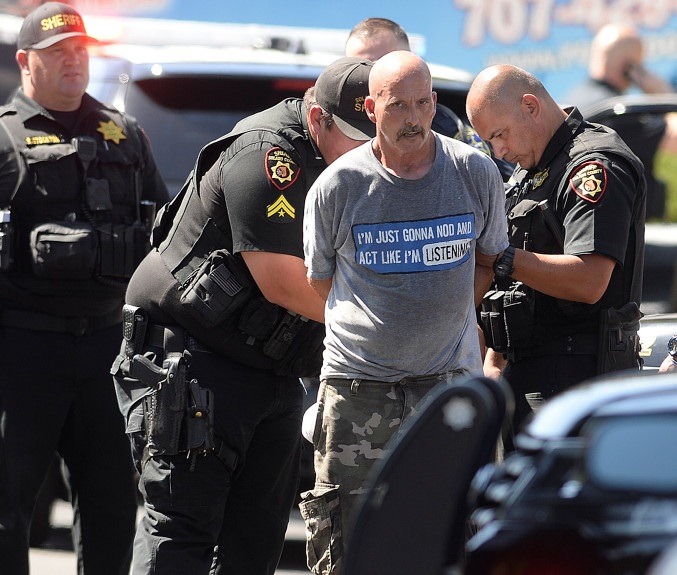 One of the suspects, Mark Alan Graham, 52, of Vacaville, fled from deputies as they were attempting to serve an arrest warrant on him for the above crimes. Graham fled the Marshall Road apartment complex where he encountered deputies and ran through a creek.

Graham then jumped a backyard fence running through a residence where he encountered a work crew. Graham asked the workers to hide him and they offered to hide him in their box truck. Graham hid himself in the box truck and the workers then flagged down Vacaville Police officers who were assisting the pursuing deputies. Vacaville police officers took Graham into custody and turned him over to deputies.

In 2017, Graham and Matthew Michael Quinn, 34,  went to a rural property on Gates Canyon Road in Vacaville to rob the owners of their marijuana grow. Graham and Quinn restrained two guards and shot one of them in the leg, before taking off with cash and a truck and trailer full of marijuana plants. The pair thought they got away with the crime until a recent DNA hit from the Department of Justice Crime Lab linked them to evidence left at the crime scene. Further investigative techniques were employed and now both men are in custody.

“DNA technology that criminalists at the Department of Justice employ to help solve crimes is simply amazing,” said California Statewide Law Enforcement Association (CSLEA) President Alan Barcelona.  “These public safety professionals work in labs throughout California putting science to excellent use.  Without their work, many cases would go unsolved and many suspects would remain unidentified.”