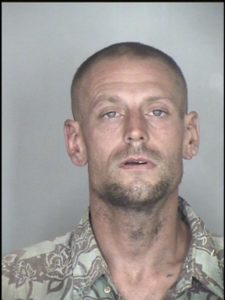 CHICO – On September 14, 2019, Kyle Richard Baldwin, 29, was arrested in connection with a January 2019 commercial burglary in Chico, as well three out of Butte County warrants.  His identification and arrest were made possible by DNA work conducted by California Department of Justice criminalists.

When the Chico Police Department responded to take a report of the commercial burglary, it was discovered that the suspect had not only entered the business and stolen numerous items, but also left behind items. Those items were sent to the Department of Justice to be processed for any DNA.

On September 10, 2019,  the Department of Justice sent Chico Police the detailed results of their analysis. The report identified that they had located DNA on the items that were sent to them and the DNA was a match for a subject identified as Kyle Richard Baldwin. The Chico Police Department has had numerous contacts with Baldwin who was listed as being transient. An arrest warrant was issued for Baldwin due to his unknown address, and he was found and arrested four days later.

“Just one more case in which work conducted by California Department of Justice criminalists has led to the identification of a suspect and subsequently an arrest,” said California Statewide Law Enforcement Association (CSLEA) President Alan Barcelona.  “Law enforcement officers simply could not be as effective as they are without their partners in forensic science!”