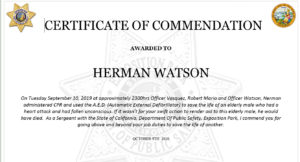 LOS ANGELES – On October 5, 2019, the Department of Public Safety at California’s Exposition Park recognized California Statewide Law Enforcement Association (CSLEA) Member, Officer Herman Watson for saving the life of a man who suffered a heart attack on a parking garage staircase following a nearby soccer game.

“It was September 10th at 11 o’clock at night and a man in his 60s, walking with his daughter and wife suddenly collapsed,” Sgt. Kenneth Williams told CSLEA.  Williams, a member of CSLEA, supervises officers at the Department of Public Safety, Exposition Park.  “A good Samaritan flagged down Officer Watson and another officer.   The victim  wasn’t breathing so the officers began CPR and when other officers arrived with an automatic external defibrillator, they went into action with that life-saving piece of equipment.”

By the time paramedics arrived, the victim was showing signs of a pulse, albeit weak, and faint breathing.  He was taken to the hospital and survived.

According to the Certificate of Commendation awarded to Officer Watson, “…If it wasn’t for your swift action to render aid to this elderly male, he would have died.”

“Sometimes we take lightly the heroic acts that public safety officers do on and off the job, but if you stop to think about it, how many of us could make the split second decision to rip apart a person’s shirt, apply electrodes to that person’s chest and deliver an electrical shock to that person’s body, all in view of that person’s loved ones,” said CSLEA President Alan Barcelona.  “Officer Watson deserves to be recognized for relying on his training, zeroing in on what had to be done and doing it.  We are very proud of what he did and thank Sgt. Williams for bringing this to our attention so that we could highlight this life-saving act and publicly thank Officer Watson for his service.  I can only imagine how grateful the cardiac victim’s family is.”