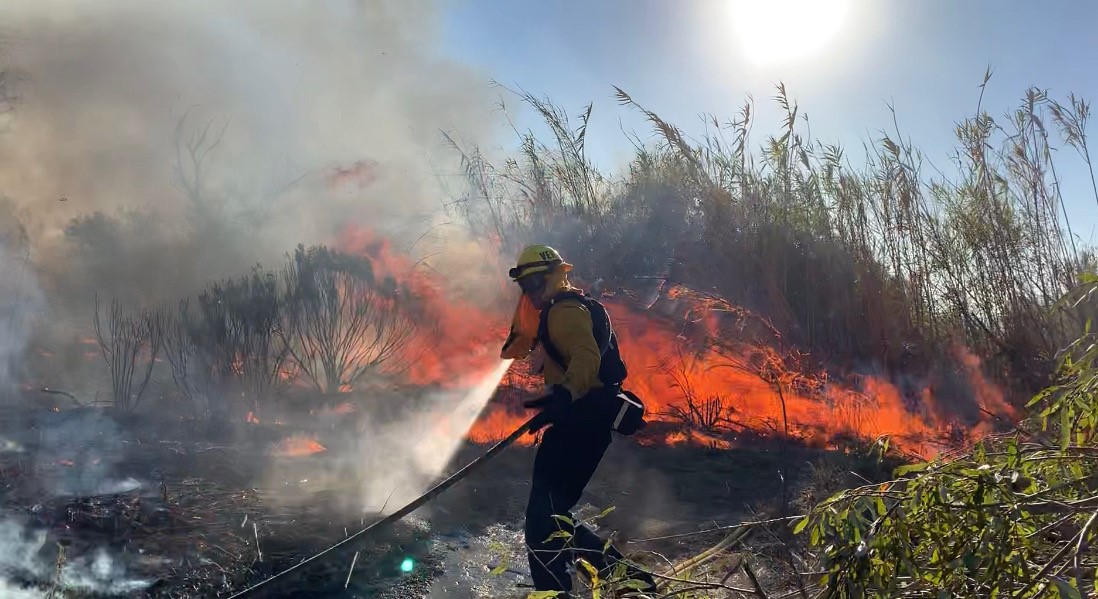 VENTURA – On October 25, 2019, flames from what appears to be three intentionally set fires raced across 7.5 acres at Emma Wood State Beach.  The fire started near illegal transient camps and burned in the Ventura Riverbed near Highway 101.

“With a great deal of skill and luck, crews were able to keep this fire, which was being pushed by wind, to just 7.5 acres,” said California Statewide Law Enforcement Association (CSLEA) President Alan Barcelona.  “Californians have a great deal of respect and gratitude for first responders who are dealing with rapidly spreading fires.”

CSLEA and Resource Protection Peace Officers Association (RPPOA) Members John Lucich and Teddy Vecchione, both California State Parks rangers, responded to the call and assisted with the arson investigation.  A possible suspect was located but no arrest was made.

State Parks is actively patrolling and working with the California Conservation Corps to remove invasive plant species and waste from illegal camping in this area, which is a watershed of the Ventura River, a watershed which has a mandate for zero waste.

“The native effects and dangers of illegal encampments on natural resources within a state park and watershed cannot be understated,” said RPPOA Board Member, Ranger Lucich.  “State Park peace officers are often tasked on a daily basis to respond to the negative effects of illegal encampments including fires, pollution and every crime imaginable.”

The fire was controlled by fire crews on the ground and water-dropping helicopters.  The Ventura County Fair Grounds, CalTrans yard, and a railroad trestle were threatened as embers from the fire ignited several palm trees and vegetation at those locations.  No structures were lost.  The cause of the fire is considered suspicious and remains under investigation.