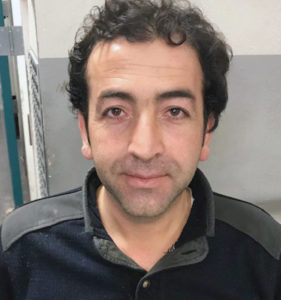 SAN DIEGO— On January 7, 2020, Zaharia Bakier, 34, who fled the United States after criminal charges were filed against him in San Diego County, was arrested for alleged vehicle insurance fraud.

An investigation by the California Department of Insurance’s Automobile Insurance Fraud Task Force, comprised of the Department of Insurance, San Diego County District Attorney’s Office and the California Highway Patrol, led to the arrest of Bakieron on three felony counts of insurance fraud.  It is alleged he staged an automobile collision, which resulted in a fraudulent insurance payout of $27,000.

Bakier booked a one-way ticket to Turkey, quit his job and fled the United States after the San Diego District Attorney’s Office filed charges against him in June 2019.

On January 7, 2020, investigators learned Bakier was expected to arrive in the United States via the Los Angeles International Airport. He has been taken into custody and booked into jail for his outstanding arrest warrant.

“The California Department of Insurance Auto Insurance Fraud Task Force is to be commended for staying on top of this case and arresting this suspect as her returned to the United States,” said California Statewide Law Enforcement Association (CSLEA President Alan Barcelona.   “Insurance fraud, no matter how large or small, puts a drain on all of us through higher premiums.”

In May 2018, investigators from the California Department of Insurance received an anonymous email reporting Bakier had staged a collision. The investigation led to Bakier’s confession that he was responsible for the collision, which caused a total loss to his vehicle. Investigators allege that he borrowed a pickup truck from a friend, used the  truck to cause damage to his own vehicle, and then returned his friend’s vehicle. Bakier then reported to his insurance company his vehicle was damaged by a hit and run driver and deemed a total loss to receive $27,000.