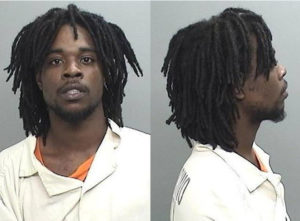 UKIAH- On January 30,2020, Dejoa Rayshawn Larue, 23, of Oakland, was sentenced to 152 months in prison for committing two felonies, the February 2019 robbery of Rite Aid in Willits and for transportation of controlled substances for purposes of sale. Larue additionally admitted a prior strike conviction charged as a sentencing enhancement -- a robbery conviction entered in Sacramento County Superior Court in October 2014.

Larue also stands convicted of attempting to bribe an executive officer, also a  felony. This conviction stems from the Larue attempting to bribe a correctional officer in April 2019 to smuggle in drugs while the Larue was incarcerated in a jail facility. Larue was sentenced y to 36 months in state prison for this crime, but the prison time was run concurrent to the greater time imposed on the pharmacy robbery case.

Because the primary robbery conviction is characterized in the Penal Code as a violent felony, the good and/or work time the defendant can attempt to earn in prison towards his early release is limited by current law to no more than 15 percent of the overall sentence, meaning he must serve just over 129 months before being released on parole supervision.

The law enforcement agencies that developed the evidence to support all of the defendant's convictions were the Willits Police Department, the Mendocino County Sheriff's Office, the California Highway Patrol, the California Department of Justice crime laboratory, and the District Attorney's own Bureau of Investigations.

“Criminalists at the California Department of Justice work to serve numerous law enforcement agencies with their cases and investigations,” said California Statewide Law Enforcement Association (CSLEA) President Alan Barcelona.   “Their work is instrumental in convicting or exonerating suspects,  and is simply invaluable in investigations and criminal justice.”