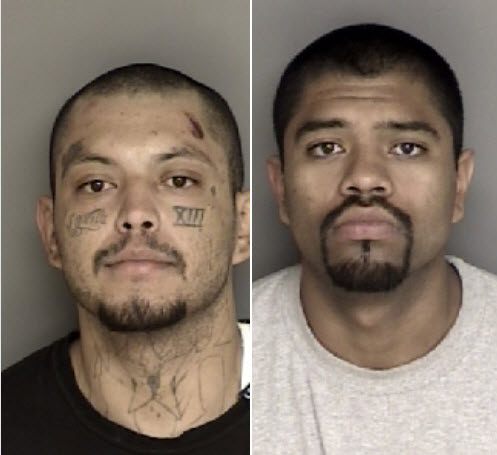 MONTEREY – On September 23, 2020, the Monterey County District Attorney’s Office announce that gang members Sergio Rodriguez and Francisco Garcia were sentenced to multiple life sentences at the California Department of Corrections and Rehabilitation.

Garcia was sentenced to a total term of 191 years to life. His co-defendant, Rodriguez, received a sentence of 270 years to life. Both men are convicted felons and Rodriguez has a prior conviction for a strike offense.

The sentencing hearing followed a multi-week trial in which the jury found Garcia and Rodriguez guilty of 22 felony counts to include conspiracy to commit first degree murder with enhancements involving discharge of firearms causing great bodily injury and five counts of attempted murder, as well as shooting at an occupied vehicle - all for the benefit of a  criminal street gang.

The convictions stemmed from an incident on August 20, 2018, when Rodriguez and Garcia stole a car and went on a “mission” with two other men into a rival gang area, looking to kill in support of the Sureno gang cause. Rodriguez fired multiple rounds at a moving vehicle with three victims inside. The defendants then fled the scene and attempted to carjack another resident who was driving into a local trailer park.

Rodriguez and Garcia continued on with their “mission” by driving to an apartment building where Norteno gang members were known to reside. At that location, they fired more than 11 rounds at two victims who were standing on the street. One of the victims, who is in his twenties, suffered multiple gunshot wounds and underwent successive surgeries to remove several bullets from various parts of his body. The doctors were unable to remove four bullets and the victim remains partially disabled as a result of his injuries.

Video surveillance obtained from various homes near this crime scene showed the defendants driving to and from the scene of the shooting and abandoning their stolen vehicle in another location. Rodriguez and Garcia were arrested following their identification from the surveillance videos. At the time of his arrest, Garcia was in possession of a semi-automatic firearm, which the California Department of Justice was able to connect to the second shooting.

“I have visited one of California DOJ’s lab for a look at how they examine ballistics and determine if a specific weapon was used at a crime scene,” said California Statewide Law Enforcement Association (CSLEA) President Alan Barcelona.   “The work is detailed, scientific and the criminalists who conduct this work are highly trained.  They are an impressive group who work to help solve crimes and we appreciate their service to public safety and the state of California.”