“It is an honor to serve on the Governor’s Medal of Valor Review Board and to, each year, select the public safety heroes in our state who deserve the highest recognition for their selfless acts to save lives.  They are among California’s brave who are willing to run toward danger to protect others from very deadly situations.” – CSLEA President Alan Barcelona 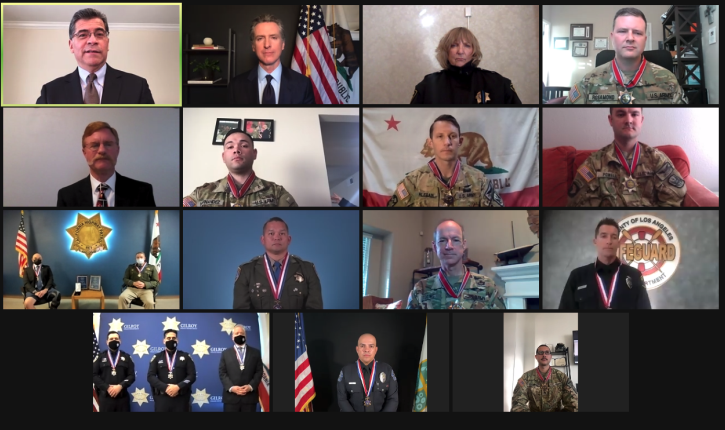 Each of these brave honorees courageously acted in ways above and beyond the call of duty to save the lives of others.

“We missed being able to be in the same room as these heroes and to shake their hands and congratulate and thank them as we traditionally do,” said Alan Barcelona, president of California Statewide Law Enforcement Association (CSLEA) and director of the Governor’s Medal of Valor Review Board.  “Given the pandemic, the ceremony was held via teleconference.   That in no way diminishes the honor these heroes have received, or our gratefulness.  They are the heroes among us.”

“Today’s Medal of Valor honorees demonstrated unparalleled heroism in service to their communities, risking their own safety to save lives,” said Governor Newsom. “Their actions are an inspiration to all of us and we offer our deep reverence and gratitude to these extraordinary individuals for the sacrifices they make every day to protect their fellow Californians.”

“The recipients of the Medal of Valor selflessly answered the call of duty, exemplified exceptional heroism in the face of imminent and life-threatening peril, and displayed the inspirational attribute of a chief responder: courage,” said Attorney General Becerra. “As our families persevere through this pandemic, it is important that we thank and honor those who give us hope. Today we do just that.”

The California Military Department processes nominations for the Medal of Valor, with awards approved by the Adjutant General and presented by the Governor.

On June 19, 2019, CHP Officer Michael Panlilio responded to a request for assistance by the Sacramento Police Department (SPD) at a Sacramento residence. The SPD advised Officer Panlilio that Officer Tara O'Sullivan of the SPD had been shot and was lying in the backyard of a residence. Any attempt to rescue her was met with gunfire by the barricaded suspect. Officer Panlilio responded to the scene without hesitation and began working with allied agency personnel to actively assess the situation. The suspect was using a high-power rifle, capable of penetrating department-issued ballistic vest material. The suspect was also shooting from an elevated position, obscured behind the walls of his home, and using security cameras to monitor the exact positions of on-scene law enforcement personnel.

Despite the extreme danger, Officer Panlilio made the decision to leave his position of safety and join the effort to rescue Officer O'Sullivan. He entered an armored vehicle, which came under fire as it breached the backyard fence and was positioned between the gunman and Officer O'Sullivan.

For his extraordinary bravery, heroism and courage in the face of imminent and personal life-threatening peril, Officer Panlilio’s actions were above and beyond the call of duty and exemplify the highest standards of a California public safety officer.

On August 12, 2019, CHP Officer Robert Paul was assisting CHP Officer Andre Moye with an enforcement stop and vehicle impound in Riverside. While impounding the vehicle, the suspect retrieved a rifle and opened fire on Officer Moye without warning, critically injuring him. Officer Paul immediately drew his weapon and engaged the suspect, while requesting backup. Riverside area CHP units immediately responded to the scene. Allied agencies were also notified, and units from the Riverside Police Department and Riverside County Sheriff’s Department responded to the call.

Officer Paul sustained multiple gunshot wounds to both legs, but continued his courageous fight from the supine position, moving himself from left to right, keeping the suspect unsure of his location. The suspect attempted to gain tactical superiority by advancing and utilizing positions of cover behind vehicles. Even though Officer Paul was outmatched by weapon capability and despite his life-threatening injuries, he was able to actively engage and hold off the suspect until backup arrived.

Deputies were able to evacuate Officer Paul from the scene and transport him to the hospital. While en route, a Riverside County Sheriff’s deputy applied tourniquets to Officer Paul's legs to stop the arterial bleeding. Officer Paul received lifesaving care from doctors at the Riverside University Health System Medical Center.

For their extraordinary bravery, heroism and courage in the face of imminent and personal life-threatening peril, Officer Paul’s and Officer Smith’s actions were above and beyond the call of duty and exemplify the highest standards of a California public safety officer.

On April 7, 2019, Hawthorne Police Officer Jose Gomez responded to a call at the Marriott TownPlace Suites in Hawthorne. What initially was identified as a domestic violence call elevated to an armed suspect threat to the general public. A male suspect, armed with a gun, was chasing a female. Multiple callers reported that the male suspect had shot the female and one of the witnesses. The suspect was now chasing the female victim toward the hotel lobby.

Field Training Officer Jesus Ceniceros was the second to arrive on the scene. Officer Ceniceros also took cover behind the pillars, limiting cover for both officers. The suspect jumped over the west wall of the building and was shot by Officer Gomez. Officer Gomez was shot by the suspect and suffered a through-and-through rifle wound to his left thigh, leaving him motionless and exposed. Hawthorne Officers Jesse Lopez, Alan Weinreb, Cody Dahlen and Robert Shay arrived on the scene and immediately began first-aid efforts by applying a tourniquet to Officers Gomez' leg. The Officers carried Officer Gomez to a nearby police unit. Officer Ceniceros drove Officer Gomez to the nearby LA County Fire Department Station for medical treatment.

Multiple agencies, including SWAT teams and fire and rescue, would coordinate the efforts to locate and arrest the suspect, who ultimately surrendered and was taken into custody by responding Manhattan Beach SWAT Officers.

For his extraordinary bravery, heroism and courage in the face of imminent and personal life-threatening peril, Officer Gomez’s actions were above and beyond the call of duty and exemplify the highest standards of a California public safety officer.

On July 28, 2019, Gilroy Police Detectives Eric Cryar and Robert Basuino and Officer Hugo Del Moral were on foot patrolling the Gilroy Garlic Festival. They were about 150 yards south of an armed suspect when he began shooting. Detective Cryar, a military veteran, immediately recognized the sound of an AK-47 style assault rifle. Detectives Cryar and Basuino and Officer Del Moral ran north through the park towards the gunfire.

The suspect was located by a large inflatable play structure that was between several vendor booths and the main stage. This area was heavily populated with adults and children. The suspect’s rifle was loaded with a 75 round drum magazine and he carried additional high capacity 40 round magazines that were taped together to accommodate fast reloading. The suspect continued to fire his rifle in a counterclockwise fashion at the crowd. He shot and killed a 25-year-old male, 13-year-old girl and a 6-year-old boy.

When the suspect saw the officers running towards him, he stopped his attack on the crowd and began firing on them. Detectives Cryar and Basuino and Officer Del Moral returned fire. Though outgunned by the suspect’s AK-47 style assault rifle, they demonstrated remarkable marksmanship and struck the suspect multiple times in the chest, back, legs and hand from a significant distance, all while under fire. The suspect ultimately turned his rifle on himself, inflicting a fatal gunshot wound.

For their extraordinary bravery, heroism and courage in the face of imminent and personal life-threatening peril, Detective Cryar’s, Detective Basuino’s and Officer Del Moral’s actions were above and beyond the call of duty and exemplify the highest standards of a California public safety officer.

As OLS Macko approached the swimmer, he saw the man was clinging to the side of the cave wall, very fatigued and barely able to keep his grip. Heavy surges and huge swells were slamming against the razor-sharp rock walls that surrounded the swimmer. OLS Macko made contact with the swimmer and used the rescue tube to tether the man to himself. He then began the grueling rescue swim back to shore. Once he spotted his exit route out of the channel, OLS Macko scrambled up the rock and assisted the patient onto land and out of harm's way. He wrapped the swimmer in thermal blankets to stave off hypothermia and continued coordinating efforts with the helicopter resource to transport.

For his extraordinary bravery, heroism and courage in the face of imminent and personal life-threatening peril, OLS Macko’s actions were above and beyond the call of duty and exemplify the highest standards of a California public safety officer.

While serving as aviation crewmembers in support of the response to the Creek Fire in Fresno on September 4, 2020, these soldiers risked their lives to rescue 30 stranded families isolated in the rapidly growing fire. They navigated a hazardous ingress route at night, identifying the only suitable landing zone for their aircraft. They returned to the rescue site two additional times to save a total of 224 citizens while surrounded by fire within 50 feet. Their personal courage and astute analysis during a dire situation saved lives. Their actions are in keeping with the highest military traditions of selfless service, honor and personal courage and reflect great credit upon themselves, the California National Guard and the State of California.