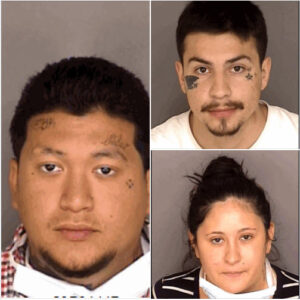 On April 20, 2020 Lopez, Garcia and Edeza drove to a residence located on Orchard Street in Salinas. The two victims, who were former Sureno associates, were standing outside the house talking to one of the residents. As Lopez drove up to the house, Garcia fired multiple rounds at the two victims. Edeza, who was sitting in the rear passenger seat, encouraged Lopez to “get them.” One of the victims was able to take cover by jumping inside the house through an open window. The second victim suffered a gunshot wound to his back and was transported to the hospital for emergency medical treatment.

After the shooting, Lopez drove to a market in Salinas where video surveillance captured the defendants’ arrival and departure. Salinas Police Department officers confirmed that the vehicle driven by Lopez was registered to Edeza. Four days after the attempted murder, Garcia was arrested for possession of a firearm. The California Department of Justice conducted a forensic examination of the firearm and concluded that the shell casings found at the crime scene were fired in that firearm.

“Having visited the California DOJ forensics lab in Ripon and seeing the firearms work performed by criminalists, I can say law enforcement investigations and criminal justice benefit greatly from their expertise,” said California Statewide Law Enforcement Association (CSLEA) President Alan Barcelona.  “There is not much dispute over their scientific conclusions in the lab.”

Lopez and Garcia were sentenced to 18 years in state prison after they pled guilty to attempted murder and admitted two enhancements for gang involvement and great bodily injury.