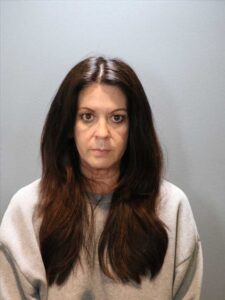 ORANGE— On April 23, 2021, former insurance broker Karen Marie Dondanville, 53, of Mission Viejo, was arrested on 90 felony counts including grand theft, insurance fraud, financial elder abuse, and forgery for allegedly collecting premiums and failing to place insurance coverage for her customers resulting in $183,047 in stolen premium payments from 32 victims over the span of eight years.

“California Department of Insurance investigators are very good at what they do and those committing criminal acts involving insurance fraud should take notice,” said California Statewide Law Enforcement Association (CSLEA) President Alan Barcelona.  “This is not a victimless crime and those convicted face incarceration and ordered restitution.”

Dondanville’s alleged fraudulent actions of overbilling, receiving excessive premium payments, and failing to remit the premiums to the insurance companies, resulted in many policies cancelling for nonpayment. Dondanville is also accused of submitting fraudulent documents to insurers to divert premium refunds to herself. This left 32 victims with more than 10,000 collective days without insurance coverage, exposing them to the danger of substantial uninsured losses.

An investigation by CDI revealed in one instance, Dondanville allegedly created fraudulent insurance documents for her client indicating that a homeowner’s policy cost $2,800, when the true cost was less than $900. Dondanville is accused of collectting the $2,800 premium payment, but remitting less than $400 to the insurance company, causing the consumer’s policy to be canceled for nonpayment, leaving them unknowingly uninsured.

The investigation further revealed one consumer filed a claim and discovered Dondanville provided a fake insurance document and the consumer’s property was not insured. The consumer experienced approximately $100,000 in uncovered losses as a result of Dondanville’s actions.

CDI issued two Cease and Desist orders against Dondanville after receiving complaints from consumers who purchased insurance from Dondanville through their mortgage company, even after the Department of Insurance revoked her license on November 6, 2019.

On January 11, 2021, the Department adopted an Administrative Law Judge’s proposed decision which affirmed the Department’s Cease and Desist Orders and ordered Dondanville to pay a penalty of $20,000 within 90 days for her unlawful insurance transactions and fraud.

The Orange County District Attorney is seeking restitution for the victims.