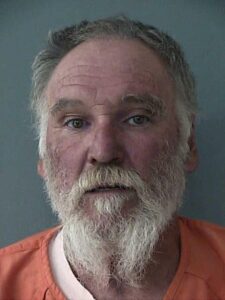 NEVADA COUNTY- On June 17, 2021, the Nevada County Sheriff’s Office (NCSO) received information regarding a possible homicide that had occurred at a property on North Bloomfield Road in Nevada City. After interviewing witnesses and collecting evidence, a search warrant was authored for the property along with an arrest warrant for Russell H. Rippetoe, 57, of Barstow.

NCSO and the Placer County Sheriff’s Office executed the warrants at approximately 7:30 PM on June 17, 2021. Rippetoe was arrested without incident. Professionals from the California Department of Justice Sacramento Crime Lab were called to assist.

On June 19, 2021 human remains were discovered buried on the property. A forensic recovery team from California State University at Chico (CSUC) responded and removed the remains on June 20, 2021. The remains were taken to the Placer County morgue for an autopsy.  The identification of the victim and cause of death are still pending.

NCSO extend a special thank you to those who assisted with the case including the California Department of Justice Sacramento Crime Lab, the Placer County Sheriff’s Office, CSU Chico, and Nevada County Public Works.