“Kudos to the citizen who brought his/her concern to CDFW so this could be investigated, stopped and the material properly disposed of and the disposal area properly cleaned,” said California Statewide Law Enforcement Association (CSLEA) President Alan Barcelona.  “California has law enforcement investigators who work to protect the environment and the public.  Many citizens have no idea how many state workers work to protect them from harm.  They work silently in the background enforcing laws, codes and regulations to keep us safe.” 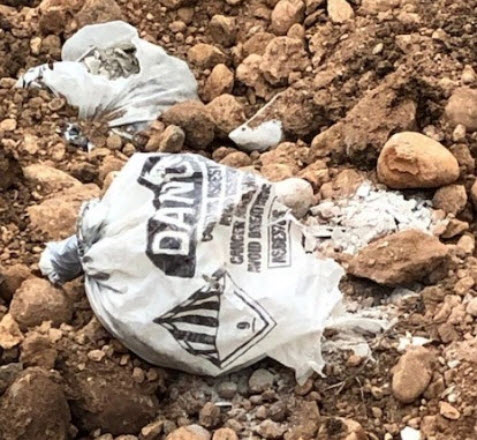 BUTTE COUNTY – On June 10, 2021, a Chico businessman pleaded guilty in Butte County Superior Court to three criminal charges arising from an incident in February of 2020 when he was caught dumping asbestos on his property in a North Chico residential neighborhood.

The charges arose from an incident in February of 2020 when the California Department of Fish and Wildlife (CDFW) was contacted by a concerned citizen in North Chico about a man, later identified as Parks, who was seen dumping large quantities of suspicious waste on his own property. A CDFW warden responded on the morning of February 29, 2020 and contacted Parks as Parks was in the process of dumping the contents of a dump truck into a large freshly dug hole on Parks’ residential property. In the hole, the warden immediately noticed a number of large bags labeled “Asbestos.” The warden quarantined the scene and contacted the Butte County District Attorney’s Office, who sent its environmental crimes investigator to assist. An environmental scientist was also called to test the bags, and it was confirmed they contained asbestos, a known toxic and carcinogenic substance. Parks’ property was immediately treated as a crime scene, and was locked down by law enforcement.

CDFW, the California Department of Toxic Substance Control (DTSC) and the District Attorney’s Office served a search warrant at Park’s property, taking additional samples of the material and taking steps to ensure the dangerous materials would not spread further. During the investigation, it was learned Parks had removed the asbestos from buildings he owned at the North Valley Plaza in Chico, and had transported it to his own residential property. Parks did not possess any of the proper permits or authorization needed to transport the asbestos, and dumped the asbestos in a way that could cause it to become airborne and expose other nearby residences. The location where Parks dumped the asbestos was also a drainage into nearby Rock Creek. Investigators also discovered another location on the same property where Parks had dumped asbestos several years before.

Parks was ordered to have all the asbestos professionally removed by an independent environmental cleanup company at his expense. The DTSC monitored the process, which took several months. The entire process cost Parks in excess of $230,000 to date. Parks’ property is now considered safe from asbestos by DTSC. Parks’ sentence will include formal felony probation with 120 days in Butte County Jail and a $100,000 fine. Additionally, Parks will be responsible for paying for the testing of neighboring properties to determine if they were affected by his dumping of the toxic materials, as well as for any cleanup that may become necessary for those properties.

According to the district attorney, had Parks chosen to dispose of the material properly in the first place, it would only have cost less than $10,000. Parks will next appear in court on July 22, 2021 to begin his sentence.