“Public land is here for all to enjoy and visitors should not have to fear stumbling across an illegal cannabis operation, people with firearms, or hundreds of pounds of garbage.  This type of operation drains our public safety resources and harms our environment.” – CSLEA President Alan Barcelona. 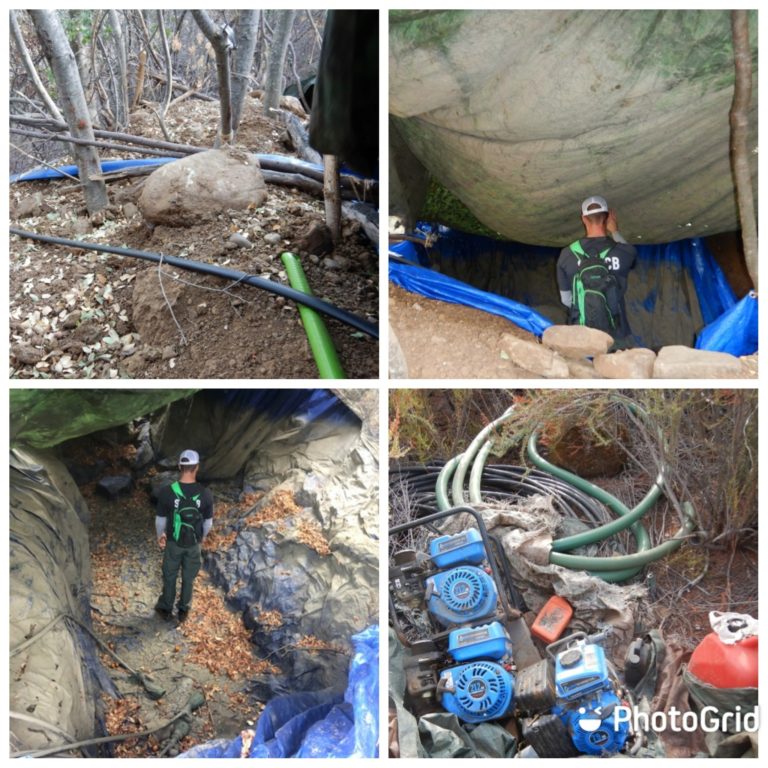 WOODLAND- On June 16, 2021, Ruben Corza, 34, of Orland and Victor Banuelos, 27, of Corning, were sentenced to two years of probation and 90 days in jail after being convicted of felony marijuana cultivation causing environmental harm.

On September 12, 2019, the California Department of Fish and Wildlife (CDFW), along with the Yolo County Sheriff’s Office, executed a search warrant on public lands within Cache Creek Canyon Regional Park after receiving a report from a hunter about hearing a generator in the area. The law enforcement officers located a large marijuana grow site hidden throughout the natural vegetation on a hillside next to Cache Creek. Additionally, investigators located a sophisticated watering system which used electric generators and multiple screened hoses to pump water uphill from Cache Creek into two swimming pool-sized containment ponds dug into the hillside. The water was then distributed via multiple irrigation lines from the two ponds downhill to the marijuana plants.

Corza and Banuelos were located in a tent next to the site and were in possession of two firearms. Both admitted to having lived there continuously since April 2019 and to using the equipment on-site to divert water from Cache Creek. Investigators located approximately 1,080 marijuana plants and removed more than 500 pounds of garbage and fertilizers from the site. CDFW and the State Water Resources Control Board later estimated that the two ponds were capable of storing 18,000 gallons of water at a time, and that Corza and Banuelos illegally diverted approximately 500,000 gallons of water from Cache Creek between April and September 2019.

On February 10, 2021, Corza and Banuelos entered no contest pleas to one felony count of marijuana cultivation resulting in environmental damage. As part of their pleas, they admitted a civil petition for full repayment of costs incurred during the cleanup of the grow site in the total of $18,616.85. To date, they have already paid half these costs, resulting in complete reimbursement to the Sheriff’s Office and partial reimbursement to CDFW prior to sentencing.

Any person over 18 who cultivates marijuana may be charged with a felony if the cultivation results in certain environmental violations or if the person intentionally causes substantial environmental harm to public lands.

District Attorney Jeff Reisig thanked the agencies involved in investigating this case and stated: “As in this case, illegal cultivations often negatively impact the environment. We need to preserve and protect our public lands in Yolo County so they remain safe for all to access and enjoy. We are committed to aggressively pursuing those who harm our precious natural resources and impact public health and safety.”