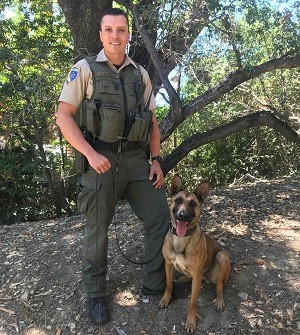 “Congratulations Warden Garcia, we are very proud of your work and pleased that you have been awarded the recognition you deserve as you protect our fish, wildlife and other natural resources.  Great job!” said CSLEA President Alan Barcelona.

“Warden Garcia only began his career as a wildlife officer in 2018, and very quickly became a force for poachers to reckon with,” said David Bess, CDFW Deputy Director and Chief of the Law Enforcement Division. “We are pleased to see his effort recognized on the scale that WAFWA represents.”

According to CDFW, Warden Garcia’s diverse district includes northern Los Angeles County and requires him to patrol the sparsely populated Angeles National Forest and San Gabriel mountains in north Los Angeles, the densely populated cities in north Los Angeles County and the busy shoreline. It is difficult for a new wildlife officer to develop expertise in even one of these patrol types within three short years on the job, but Garcia has excelled in each of these areas and made one big case after the other since the day he started.

Warden Garcia also recently became qualified with his new Warden K-9 partner Remi, who will accompany him on patrol.

The Pogue-Elms Award is named for Idaho Wildlife Officers Bill Pogue and Conley Elms, who were killed in the line of duty while conducting a poaching investigation in 1981. The award is presented to a wildlife officer of a member agency for one or more of the following: