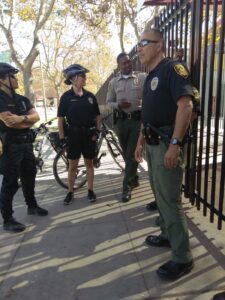 SACRAMENTO – On September 7, 2021, Assembly Bill 483 - Peace officers: California Science Center and Exposition Park, introduced by Assemblymember Reggie Jones-Sawyer and sponsored by the California Statewide Law Enforcement Association (CSLEA), passed through the legislature and is on its way to Governor Gavin Newsom’s office.

“If signed by the Governor, this CSLEA-sponsored bill would grant peace officer status to security officers of the California Science Center, appointed by the Exposition Park Manager, and would make clear, the training requirements for our security officer members at the California Science Center and Exposition Park,” said CSLEA President Alan Barcelona.  “This is a long-time coming, our security officers there are deserving of this, and we thank Assemblymember Jones-Sawyer for his leadership and work to make this happen.” 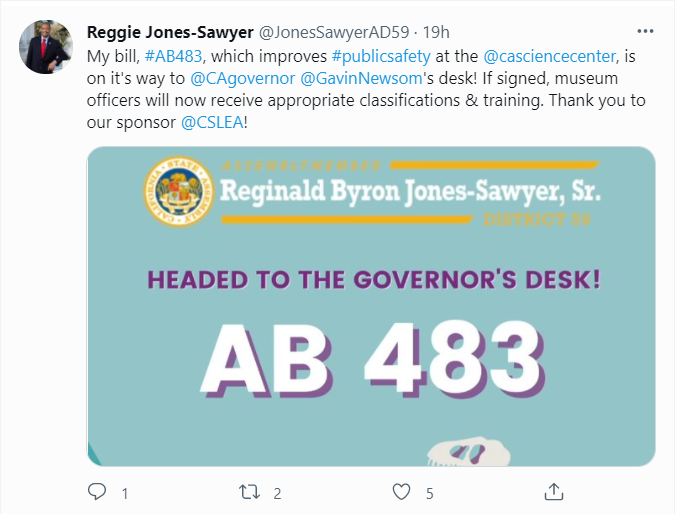 Under existing law, security officers of the California Science Center are responsible for providing police and security services, keeping order, and protecting people and property at the California Science Center and at Exposition Park. However, under existing law, they are not peace officers even though they exercise the powers of arrest during the course of their duties.

The history: In 2019, CSLEA’s MOU included giving Museum Security Officers at the California Science Center and Exposition Park peace officer status. However, any change in peace officer classifications must be done through statute, so CSLEA sponsored AB 2891 by Assemblymember Reginald Jones-Sawyer to codify this change in law. When the bill was introduced in February 2020, COVID-19 was becoming a pandemic and the Legislature left for an extended spring recess beginning in March, returning toward the end of May. As the Legislature returned, the leaders of both houses requested members limit the number of bills to their top priorities and pertinent issues facing the state including bills pertaining specifically to COVID-19, wildfires, or housing. Although AB 2891 did not fall into these categories, Assemblymember Jones-Sawyer moved forward with the bill regardless as it was a promise made to CSLEA in their MOU with the State.

When AB 2891 was heard in the Assembly Public Safety Committee, chaired by Assemblymember Jones-Sawyer, the bill received unanimous support. Unfortunately, as a surge in COVID-19 cases hit the Capitol, members of the Assembly tested positive, delaying the return of the Legislature from summer recess until mid-July.

AB 2891 was eventually moved to the ‘suspense file’. Despite efforts to move this bill forward, the bill got caught up in a tug-of-war battle between the Senate and Assembly in an attempt to limit the number of bills in the final weeks of session. This bill, and literally hundreds more, did not move at the end of session.

Despite the setback, CSLEA continued to advocate for this change in law and sponsored AB 483 in 2021.

“Currently our Museum Security Officers have ‘powers of arrest’ but not full peace-officer powers,” said CSLEA President Alan Barcelona.  “They work in an environment that is much like the rest of the city of Los Angeles in which the Science Center sits. They encounter convicted felons on the property, illegal drug use, robbery and even murder suspects.  They also assist local law enforcement departments.  It only makes sense that they have full peace officer powers.  CSLEA is grateful this bill will be considered by Governor Newsom, thankful to Assemblymember Jones-Sawyer, and to our members at the Science Center and Exposition Park who have confidence in CSLEA to push for what is successfully negotiated in our contract.”

CSLEA Letter to Governor requesting his signature on AB 483