“The consumer protection and public safety professionals who conduct these undercover operations are working to protect property owners and their families from possible harm as unlicensed contractors have not passed tests that prove they have the knowledge and skills for the home improvement jobs they seek, nor have they passed a CSLB background check.” – CSLEA President Alan Barcelona 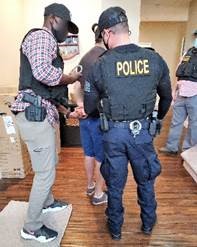 SACRAMENTO – On October 12, 2021 the Contractors State License Board (CSLB) announced the results of an undercover sting operation conducted in Sacramento County on September 21-22, 2021.  During the operation in which investigators posed as homeowners at a residence in the Elk Grove area, a contractor without a CSLB license placed a $60,000 bid for a kitchen remodeling project. By law, a contractor license is required in California for construction jobs over $500.

Assisting with the enforcement operation were representatives from the California Department of Insurance and the Sacramento County District Attorney’s Office.

All suspects were ordered to appear in Sacramento County Superior Court, on December 21 and 22, 2021.