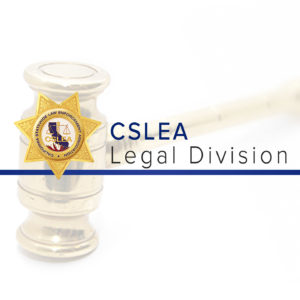 In excess of $60,000.00 to be distributed among 84 current and former HPOs who will be required to sign an Individual Release of Claims form in order to receive compensation

SACRAMENTO - California Statewide Law Enforcement Association (CSLEA) is pleased to announce that an agreement was reached between CSLEA and Cal HR/Department of State Hospitals concerning compensation due to Hospital Police Officers (HPOs) who were called out from various parts of the state to assist their fellow HPOs at Coalinga State Hospital (CSH) in 2018.

After being notified of the circumstances under which many of the HPOs were called out to CSH, CSLEA filed a grievance on behalf of HPOs from Atascadero, Metropolitan, Napa, and Patton State Hospitals. The concerns raised as part of the grievance included that HPOs technically remained on-duty while they were being housed by DSH at a location near the CSH facility, the Harris Ranch Inn. The HPOs remained under the control of DSH as they were required to eat their meals at the Harris Ranch dining facilities. In addition, most HPOs arrived without any spending money/stipends, and, the HPOs were unable to leave the Harris Ranch location unless they were returning to CSH for their next work shifts.

On January 12, 2018, threats of possible rioting among the patient population began after CSH administered restrictions concerning the use by patients of electronic devices. CSH is a facility which houses approximately 1,300 individuals, most of whom are convicted sexually violent predators. The restrictions were implemented as concerns grew that the patient population were acting as distributors of child pornography. HPOs from Atascadero, Metropolitan, Napa, and, Patton began arriving at CSH on January 14, after a lockdown of the CSH facility was declared. Tensions reached a boiling point on January 16, when several patients struck officers and threw liquids at them.

According to e-mail correspondence issued by DSH police supervisory personnel, the HPOs who were being housed at the Harris Ranch Inn who were not at CSH working a 12-hour shift were required to be available to respond to any requests for assistance at CSH, if necessary, within twenty minutes. The Bargaining Unit 7 Memorandum of Understanding allows for a minimum of a one-hour response time for any on-call staff. In addition, the HPOs were not allowed to drive their own vehicles to CSH for their deployment. Instead, they were shuttled from their respective facilities in vans. After arriving at Harris Ranch, HPO staff were not allowed to take the vans off the Harris Ranch grounds during their “off time” because the vans needed to be available if the HPOs were called back to assist at CSH.

Ultimately, the parties have agreed that HPOs will receive the equivalent of four hours of compensation for every 12 hours they were at CSH in addition to the compensation they already received for the work they performed in 2018. CSLEA applauds HPO staff who dedicated up to five days at a time away from their families to execute their duties and to protect CSH staff and the patient population.

CSLEA and Cal HR have compiled a list of HPOs who will be compensated for their work. Each HPO will be required to complete and submit to DSH an Individual Release of Claims form. CSLEA Supervising Legal Counsel David De La Riva will be available to answer questions and seek signed releases from the impacted individuals.

Although CSLEA wishes this matter was resolved much more quickly, CSLEA is pleased that the resolution provides additional compensation for HPOs assigned to the CSH deployment.