CDFW Wardens Assist MCSO with Service of Search Warrant Fourteen firearms, along with ammunition and high-capacity magazines were seized from inside residence

“The service of this search warrant could have taken a very dangerous turn for all involved.  I am grateful to law enforcement officers who risk their safety and lives to investigate individuals suspected of breaking the law and putting us all at risk.” – CSLEA President Alan Barcelona 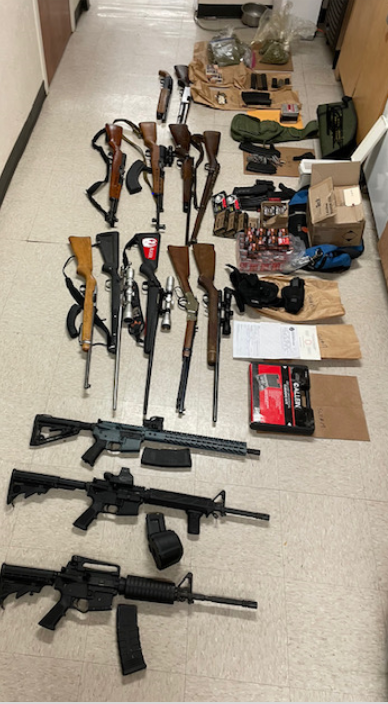 COVELO – On January 9, 2022, the Mendocino County Sheriff's Office (MCSO) announced the results of a search warrant served at a home in Covelo on January 1, 2022.  The search warrant was the result of a traffic stop three days earlier in which a MCSO deputy conducted a late-night traffic stop on a vehicle with expired registration which then led to the discovery of drugs and a teenager with a felony warrant for his arrest, inside the vehicle.

The vehicle stop: On December 29, 2021, the deputy contacted the driver and registered owner, Leonard Whipple III, 20, and four juveniles in the vehicle.  A records check on all the individuals revealed a 16-year-old male passenger had a felony warrant for his arrest. The deputy smelled burnt marijuana, saw burnt marijuana cigarettes, and noticed bud marijuana inside the vehicle.

Whipple III was cited and released for 11360 HS (transportation for sale of marijuana). The 16- year-old passenger with the felony warrant was arrested and transported to the Mendocino County Juvenile Hall.

The search warrant: On January 1,2022 at about 4:00 p.m. MCSO deputies along with California Department of Fish & Wildlife (CDFW) wardens went to a residence in the 400 block of Hatchet Mountain Boulevard in Covelo to serve a search warrant related to the traffic stop.

Bettega was handcuffed and detained in a patrol car. When law enforcement officers entered the home, they found a 13-year-old inside.  They also located 14 firearms, along with ammunition, high-capacity magazines and drugs. Most of the firearms were located in Leonard Whipple III's bedroom. None of the firearms were secured and most were loaded and accessible to the juveniles who lived in the home. This included two loaded firearms and ammunition in the 13-year-old’s bedroom. Some of the firearms had characteristics classified as an assault weapon in California and there were two unlawful short barreled shotguns.

Bettega was arrested for resisting deputies with violence (69 PC) and child endangerment (273a(A) PC).  She was booked into the Mendocino County Jail where she was to be held in lieu of $50,000.00 bail.

During the investigation, law enforcement officers located evidence to show Leonard Whipple Jr., 39, had also been associated with the firearms located. Deputies confirmed Leonard Whipple Jr. was prohibited by law from owning or possessing firearms and ammunition.