“By investigating cases such as this, CDFW officers are working to stop illegal ivory trade and possibly the slaughter of animals associated with ivory.  Kudos the law enforcement officer who recognized this was taking place and conducted the undercover investigation.” -CSLEA President Alan Barcelona 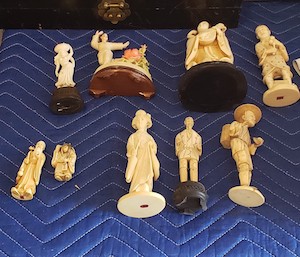 SAN DIEGO – On January 24, 2022, Stephen Shu Wang, 54, of San Diego, a man who was selling ivory carvings in violation of the law was ordered to surrender his entire collection, which he was selling from his garage to buyers he found online. In addition to having to surrender his collection of ivory pieces, the judge ordered Wang to remain law abiding for a year, and to complete 100 hours of volunteer work with a nonprofit organization involved in animal conservation.  Wang also agreed to a Fourth Amendment waiver, which means authorities may search his home or other premises controlled by him without a warrant to ensure he remains in compliance. If Wang fails to comply with the conditions set forth by the court, the prosecution of his case will resume.

Wang’s collection consisted of approximately 200 ivory artifacts and art pieces that were confiscated from his home by California Fish & Wildlife (CDFW) officers in 2020. The collection included chess sets, portions of elephant tusks, a room divider screen with panels made from ivory, carvings of the “eight immortals” of Chinese mythology, a statue of a geisha, and a variety of netsuke -- miniature Japanese sculptures. 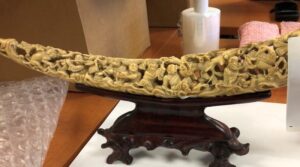 Estimating the value of the items is difficult, since there is no legal market for their sale or purchase, but altogether they would likely have sold for more than $100,000 on the black market. Purchasing, trading, selling, or possessing the ivory of elephants, rhinoceros, hippopotamus, and other creatures has long been prohibited by state, federal, and international law.

Wang was charged with 15 misdemeanors:

Wang faced a maximum penalty of eight years in prison, and fines between $40,000 and $320,000. The defense argued for diversion instead, which the court granted, over the objections of the City Attorney’s Office.

Under a new California law that went into effect in 2021, defendants in most misdemeanor cases may seek court ordered diversion, thereby avoiding more serious penalties as long as they remain law-abiding and follow other conditions ordered by the court. If those conditions are met, the case may be later dismissed, without the defendant having the potential burden of a criminal conviction on their record.

Wang’s activities came to light because he was advertising ivory items for sale online. Undercover CDFW officers contacted him. One officer met Wang on two occasions, posing as a buyer. Once they agreed on the sale of more than two dozen items for the price of $6,500 CDDFW officers descended on the property to serve a search warrant, finding an estimated 200 items in the house and garage.

Authorities determined that most of the objects in Wang’s collection were made of elephant tusks, but a few may have been made from walrus or hippopotamus, which is also illegal.