MARIPOSA- On March 25, 2022, a Mariposa County Superior Court jury found Douglas Popke, 71, guilty of attempted murder of a police officer and assault with an assault weapon on a police officer.

Just after 7:30 pm on August 28, 2020, Deputy Jose Garcia of the Mariposa County Sheriff’s Office arrived at a residence to serve court paperwork. He was greeted by Popke at the back door of the residence. Popke became irate and went back inside, grabbed an AR-15 300 Blackout Assault Rifle. Popke then exited another door and engaged Deputy Garcia who told him to put the gun down. In response, Popke opened fire on the deputy. The deputy and Popke exchanged gunfire and the deputy ran to safety.

Sentencing is scheduled for June 23, 2022, in Mariposa County Superior Court where Popke faces life in prison. 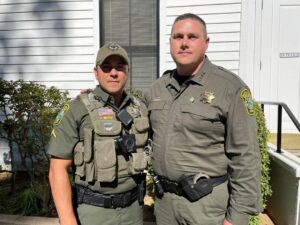 The case was prosecuted by District Attorney Walter Wall and was investigated by the Mariposa County Sheriff and the California Department of Justice Bureau of Forensic Science.

“California Department of Justice criminalists are an asset to investigators as they process crime scenes and evidence.  In this case, their work helped to convict a dangerous individual who attempted to take the life of a crime fighter and protector of the community, a peace officer,” said California Statewide Law Enforcement Association (CSLEA) President Alan Barcelona.

“This verdict is statement that Mr. Popke is accountable for his actions. This guilty verdict is proof of our community’s commitment to law enforcement and to criminal justice,” said District Attorney Walter Wall. “With this conviction we have secured justice in a case involving a direct attack on our law enforcement officers. This verdict validates the respect and appreciation we have for all our deputy sheriffs who work day and night to keep our county safe and secure. This has been a harrowing experience for Deputy Garcia and his family and I am glad to see justice done. My office will always do everything in its power to ensure that those who choose to ambush and execute our officers are prosecuted to the full extent of the law.”