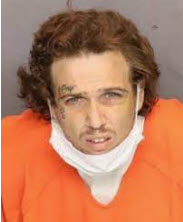 SAN JOAQUIN COUNTY - On May 17, 2022, the San Joaquin County District Attorney’s Office announced that Richard Nielson, 32, of Lodi was found guilty of first-degree murder in the death of his father and the intentional discharge of a firearm causing death.

On May 27, 2021, the San Joaquin County Sheriff’s Office received a call from a family member of the victim, Roger Nielson, requesting a welfare check. When deputies arrived to check on Roger Nielson, they discovered him deceased inside the home. His death was determined to be a homicide.

The victim’s son, Richard Nielson, in violation of his probation, had fled to Mexico on May 23, 2021. With the assistance of the Mexican authorities, U.S. Marshals arrested Richard Nielson in Guadalajara in early June 2021 and deported him to the United States where he was taken into custody by the San Joaquin County Sheriff’s Office.

The San Joaquin County District Attorney’s Office extends gratitude to Victim-Witness Advocates for providing services and support to the victim’s family during this very difficult time, as well as the California Department of Justice for their assistance in locating the Richard Nielson.

Richard Nielson returns to court for sentencing on July 5, 2022.