“California’s wildfires are devastating to people, property and wildlife.  Identifying, arresting and prosecuting suspected arsonists who have demonstrated they are capable of harming so many, and so much, is essential to public safety.” -CSLEA President Alan Barcelona 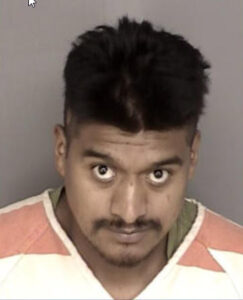 MONTEREY COUNTY – On May 18, 2022, the Monterey County District Attorney’s Office announced that convicted arsonist Ivan Gomez, 31, was sentenced to 24 years in state prison. Gomez had previously been found guilty of the arson known as the Big Sur Dolan fire, which seriously injured a firefighter and destroyed multiple homes. He was also found guilty of the arson of the Los Padres National Forest, throwing rocks at a vehicle, cultivating marijuana, and 12 counts of cruelty to animals for killing multiple condors that perished in the fire. In total, he was found guilty of 16 felony counts.

He was sentenced him to the upper term of nine years for the arson causing serious injury to a firefighter and an additional five-year enhancement for destroying 14 structures, including residences. He was also sentenced consecutively for each of the additional charges, of which he was found guilty, for a total of 24 years.

At the defendant’s trial the evidence established that on August 18, 2020, at approximately 8:15 pm California State Parks officers observed a fire cresting the ridgeline known as “top of the world” in the Los Padres National Forest. At approximately the same time, officers were dispatched to a man throwing rocks at vehicles on Highway 1 and the Lime Creek Bridge. When officers contacted this man, later identified as Ivan Gomez, he stated he had started the fire at an illegal marijuana grow on the other side of the ridge and killed 5 men.

The U.S. Forest Service Region 5 Wildland Fire Investigation Team conducted a multi-week investigation that confirmed that the fire originated at the illegal marijuana grow site. This piece of evidence proved essential. Gomez correctly identified the origin area, which was corroborated by the People’s fire investigators and confirmed by the defense’s expert. The evidence showed that Gomez would have had time to start the fire which, was calculated to start around 5 pm, and make it to the Lime Creek area where he was confronted at 8:15 pm. Firefighters testified that no other individual(s) were found in this area and that Gomez was shirtless, sweating, and found with multiple lighters on his person when contacted by law enforcement. The lighters found on him were in working order and matched others found at the origin point. In a 3-hour-plus long interview with detectives from the Monterey County Sheriff’s Office, Gomez admitted he started the fire numerous times.