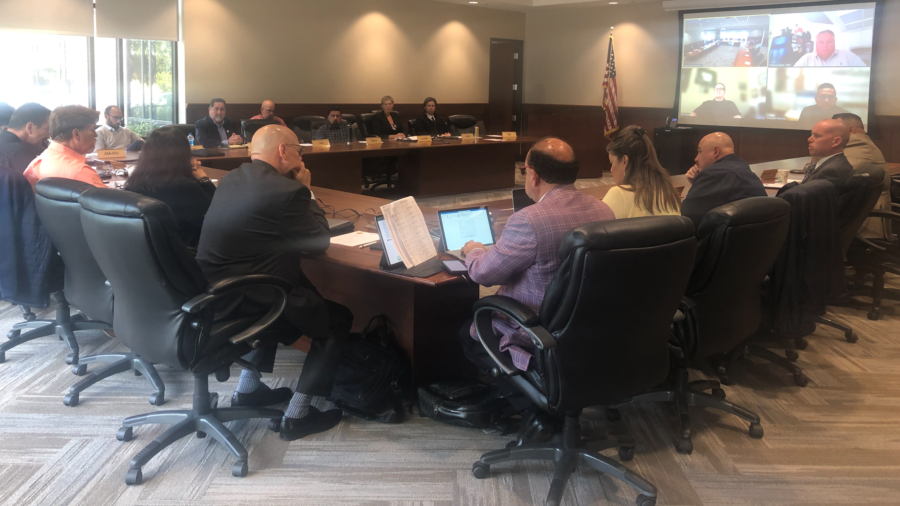 SACRAMENTO- On September 19, 2022, California Statewide Law Enforcement Association (CSLEA) officers and directors met at CSLEA headquarters and via videoconference for staff and consultant updates and to discuss issues and actions that impact CSLEA members.  New to the CSLEA Board is Director Sal Martinez, newly-elected president of the California Association of Alcoholic Beverage Control Agents (CABCA).

“We look forward to working with Director Martinez and welcome him to the CSLEA Board,” said CSLEA President Alan Barcelona.  “He has truly experienced first-hand how beneficial union membership is, when, years ago, he had to exercise his peace officer powers while he was off-duty and incidentally was charged with a crime by an overzealous district attorney who no longer remains in office.  He needed legal defense. CSLEA was with him every step of the way. After a 90-minute deliberation he was acquitted of all charges by a jury. He continues to work as a peace officer, because of the support of our union.  We fought for him and we won!  He is an asset to all of us, as we continue our work toward improvements for our members.”

The Board received updates from CSLEA Political Consultant Peter Mitchell and Legislative Advocate Shane LaVigne.  Mitchell reviewed those in office and potential candidates on the local, state and federal level.  He discussed issues that may determine the outcome of future elections including inflation, crime, homelessness and United States Supreme Court decisions. Mitchell commended CSLEA directors who have worked for and gained political strength and the importance of being able to reach out to legislators and those in constitutional offices.

Legislative Advocate Shane LaVigne updated directors on legislation that made its way to the Governor’s Office and legislation that failed.  Legislation of particular interest to the Board was SB 284 that passed through the Legislature at the end of session and what SB 2 holds in store for peace officers and their profession.

“No peace officer should be working without the safety net of their union,” said President Barcelona. “Especially as SB 2 (police certification) unfolds starting in January.”

CSLEA Chief Counsel Kasey Clark gave the Board a report on the Legal Defense Fund and Legal Representation Committee (LRC).  Clark gave the board an update on the status of the post-Janus litigation and the plaintiffs' petition for United States Supreme Court of the appellate decisions denying their request for relief. Clark informed the Board of the cases approved for arbitration by the LRC and an appeal from medical demotion that Clark is handling on behalf of a State Park Ranger.

CSLEA CFO Ricardo Sanchez spoke to the board about CSLEA’s budget and membership including membership outreach and retention.   The update sparked a discussion about union benefits and how to impress to non-members the importance of supporting the union that works for them.

CSLEA Unit-A Vice President and Foundation Chair Dr. Kenneth Ehrman advised the Board that the 2022 scholarship cycle has concluded with the awarding of eight $1,000 scholarships.  “This was the most qualified batch of applicants I have ever seen,” said Ehrman.  “The recipients and their families are so grateful.  It’s always a pleasure to call and advise them they have been chosen as a recipient.”

“We received great updates on the political affairs in California and the rest of the nation which helps us understand where we are in relation to upcoming negotiations,” said CSLEA Unit-B Vice President and CARII President Tom Ineichen.  “It was great to see that our executive staff and lobbying team is on top of the issues.”

“It is always great to see all of the affiliate presidents and how involved they are with their members,” said CSLEA Senior Vice President and CHP-PSDA President Tina Brazil.  “Our meeting was informative and were updated on what CSLEA is working on and continuing to work on, on our members’ behalf.  I encourage our members to look for our updates and CSLEA newsletter which is emailed and can be found on the CSLEA website.”