SALINAS - At a time when water is scarce and fire danger is high, a California Department of Justice Task Force found 1800 pounds of illegal fireworks tucked away and for sale in a backyard shed in Salinas.  After an undercover officer made a deal to purchase the small explosives and aerial fireworks, agents and officers arrested Daniel Escatel Alcocer, 33.   The arrest was made Saturday, June 14, 2014.

The task force received information that Alcocer was selling illegal  fireworks through Facebook.  Officers used Facebook to contact Alcocer and set up a deal to purchase the fireworks from his home on Towt Street.  The fireworks, which consisted of small explosives as well as aerial fireworks, were on display in a backyard shed.  Using a pricelist Alcocer posted on Facebook, the inventory was valued at approximately $20,000. 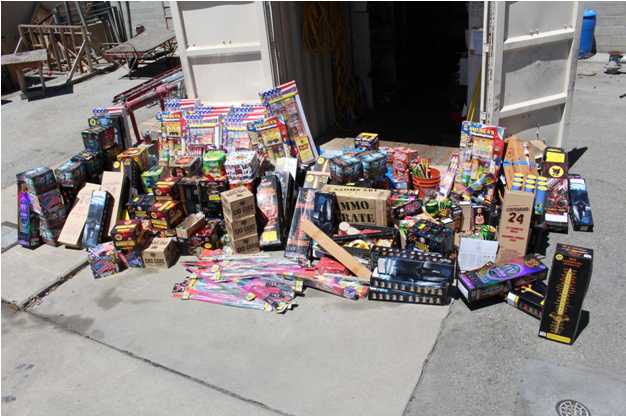 "Department of Justice task forces are strong crime-fighting tools serving communities on many different levels," said Alan Barcelona, president of the California Statewide Law Enforcement Association (CSLEA) which represents DOJ agents as well as nearly 7,000 other California law enforcement, public safety and consumer protection employees.  "Combing law enforcement efforts and expertise helps to make our neighborhoods, our cities and towns, and our state safer.  Eighteen hundred pounds of illegal fireworks could have become disastrous in any number of ways."

Alcocer was taken to the Monterey County Jail and booked on both misdemeanor and felony charges related to possession and sales of illegal fireworks.