On September 17, 2015, Stockton Police announced that Operation Cease Fire was a huge success.

Seventy-six people were arrested, including a 24-year-old murder suspect accused  of killing a man on July 13, 2015.

In addition to the arrests, special agents and officers seized 68 firearms, 30 pounds of meth, as well as cocaine, heroin, marijuana and more than $89,000 in cash.  They also seized body armor. 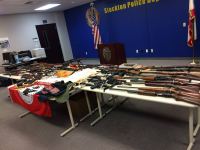 "Criminal street gangs terrorize neighborhoods and communities," said California Statewide Law Enforcement Association (CSLEA) President Alan Barcelona.  "Recognizing the need for special agents and their expertise in this area, last year CSLEA made an all out legislative push for $9.4 million dollars in the state budget for DOJ's Multi-Jurisdictional Task Forces and Special Operations Units.  Special agents are a critical role in taking down the worst of the worst in our state."

Operation Cease Fire was formed due to a violent, ongoing feud between two of Stockton’s most notorious norteno criminal street gangs. 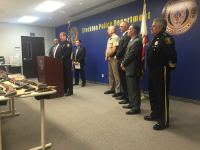 “Through an Operation Ceasefire analysis, we identified these two groups who have been feuding and started an in-depth investigation into their illegal criminal activities,” said Stockton Police Chief Eric Jones. “We will continue these types of investigations because we are following through on our commitment to combat gang violence and shootings in our city.”

On September 16, 2015, special agents and officers served 36 search warrants and as many as 28 arrest warrants throughout  Stockton and San Joaquin, Sacramento, Calaveras, and Merced Counties.

Among those arrested September 16th, was Valentin Vivero, 24, accused of killing Ray Ortega, 41 in Stockton on July 13, 2015.   Five people were shot in that shooting on McCloud Avenue.  Also arrested in connection to the homicide was Benny Castaneda, 35, for criminal conspiracy and gang charges. 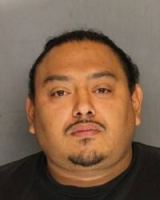 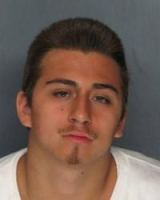 The Stockton Police Department thanks the following agencies: