LINCOLN - Congratulations to California Alcoholic Beverage Control (ABC) Agent Dustin McLaughlin for the recent honor of receiving Placer Law Enforcement Agencies' (PLEA) Gold Medal of Valor.  McLaughlin was honored, along with other law enforcement officers from agencies in Placer County, on November 5, 2015 for his outstanding service in the line of duty as a police officer for the Auburn Police Department.

On December 21, 2014, McLaughlin responded to an active shooter call at an Auburn residence.  The Placer County Sheriff's SWAT team deployed a deputy to the rooftop of the home.  When that home caught fire with the deputy stranded on the roof, Officer McLaughlin and CAL FIRE Captain Doug Mackey courageously braved gunfire and heavy smoke to position a 40-foot ladder to the roof of the residence to rescue the deputy from the burning surface.  The pair of rescuers also evacuated residences who were in the line of gunfire. 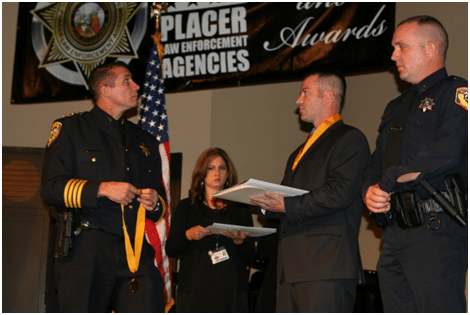 "We are extremely proud of  California Statewide Law Enforcement Association (CSLEA) Member -Agent McLaughlin," said CSLEA President  Alan Barcelona.  "His courageous actions spotlight the life-endangering lengths  law enforcement officers go to, to protect the lives of others.  I am also, so very grateful that he and the others who responded to this active shooter call returned home safely to their families."

"Dustin McLaughlin joined ABC just this year and ABC is better for it," said California Alcoholic Beverage Control Agents (CABCA) President Kevin Highbaugh.  "Our agents are high caliber law enforcement officers who, not only  specialize in ABC laws, but in all types of law enforcement including weapon and drug violations, gang and human trafficking activity and illegal gambling.  Congratulations to Agent McLaughlin.  I know he will tell you, he was just doing his job."