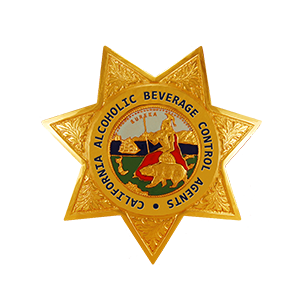 "A great day would be a hundred percent compliance.  Is that realistic? Probably not. I'd prefer if everybody just said no and we went home with a bunch of people that were compliant.  But realistically, it's not going to happen.  Somebody is going to say yes and buy alcohol for one of these minors." - CABCA President, ABC Agent Kevin Highbaugh

"We deal with nearly everything your local law enforcement officers do," said Kevin Highbaugh, president of the association California Alcoholic Beverage Control Agents (CABCA).  "As part of our public awareness campaign about underage drinking, we conduct an annual decoy operation in March, typically the weekend prior to St. Patrick's Day and bust those who buy booze for the under 21 set.  Don't do it, it's a bad idea, it's breaking the law."

More than 400 people in California did just that and were busted by ABC agents who teamed up with local police and sheriff's departments in an annual, statewide  shoulder-tap operation on Saturday, March 12, 2016.

"Excuse me," a 19-year old decoy said to a passerby  outside a convenience store in Auburn.  "My friend and I are going to a party and the guy inside won't sell me beer because I'm only 19, could you buy some for me?"

"Hey could you do me a favor,"  a young man under 21 asked a customer outside of a liquor store, also in Auburn, "I'm not necessarily 21 and I was wondering if you would buy me some beer?"

"I'm not necessarily going to jail," the customer responded.  "No."

"Congratulations, guy," said Highbaugh as he watch the decoy operation from the store parking lot and listened in on the wire worn by the decoy.  "You did the right thing."

Highbaugh and ABC Agent Dustin McLaughlin teamed up with the Auburn Police Department and planted decoys at liquor and convenience stores throughout the city.   Throughout the afternoon, the decoys asked passersby to purchase alcohol for them.  While many said no, some did not.

"We busted one guy who is out on parole, he says for identity theft?" said Highbaugh.  "He knew he shouldn't have purchased the beer for the girls, he even told them 'don't get me in trouble.' "

Statewide, agents, along with officers and deputies from about 80 local law enforcement agencies,  arrested more than 400 people who took the bait and bought beer, wine or hard liquor for kids.  During the operation 416 citations and/or  arrests were made.  In addition to being cited for furnishing alcoholic beverages to minors, more than 70 people were arrested or cited for open containers, false identification and other crimes such as possession of illegal drugs, public drunkenness, parole and probation violations.

"While this is just a small part of what our ABC agents do, it can make a huge impact on the safety of our youth and young adults," said Alan Barcelona, president of the California Statewide Law Enforcement Association (CSLEA).  "Underage drinking leads to DUIs, vehicle accidents, fights, sexual assaults and even alcohol poisoning.  Decoy operations get the word out to the public, you'll be cited or arrested, furnishing alcoholic beverages to anyone under 21 is against the law.  I thank our ABC agents for all of the law enforcement work that they do, including preventing kids from drinking."

This week, you'll be able to ride along with ABC agents and Auburn police during their March 12th decoy operation via a CSLEA video presentation.  Here's a preview of what to expect:

The penalty for furnishing alcohol to a minor is a minimum $1000 fine and 24 hours of community service.