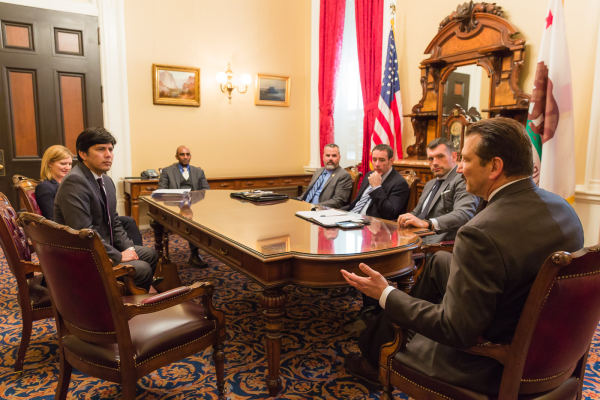 "It is imperative that  we stop the bleeding at ABC," said CSLEA President Alan Barcelona.  "Agents are leaving  ABC at an alarming rate for comparable, if not better, pay and better hours at other departments, both local and state.  The money to pay these highly trained agents is already sitting in a $29 million fund that licensees pay into.  Increasing ABC agent salary will help ABC to retain the  agents it has already invested time, training  and money to.  Not to mention, the alcohol industry is supportive of this.  Quite frankly, right now, licensees are not getting their money's worth, they are not getting what they pay for."

The group also discussed Assembly Bill 2165, legislation CSLEA has taken the lead in co-sponsoring.   AB 2165 was introduced by Asemblymember Rob Bonta with coauthors Assemblymembers Gonzalez, Hernández, Lackey, Wilk and Senator Roth.  AB 2165 is an act to amend Section 32000 of the Penal Code, relating to firearms.  Existing law makes it a crime for any person in this state to manufacture, import into the state, keep for sale, offer or expose for sale, give, or lend an unsafe handgun. Under existing law, this prohibition does not apply to the sale or purchase of a handgun if the handgun is sold to, or purchased by, a police department, the Department of Corrections and Rehabilitation, or any federal law enforcement agency, among other entities.  AB 2165 would add peace officers and law enforcement personnel who, in 2001,  were left off the list of agencies who may purchase non-roster firearms for use in the discharge of their official duties.

"I want to thank Senate President pro Tem Kevin de Leon for taking time to meet with us on these two very important matters, " said CABCA President Kevin Highbaugh.  "Both directly impact ABC agents and must be addressed."