STOCKTON — Stockton residents may be breathing a big sigh of relief after learning about "Operation Bloodline," an investigation and enforcement effort by California Department of Justice special agents that targeted violent gangs terrorizing their community.

On May 20, 2016,  Attorney General Kamala Harris announced the successful takedown of two criminal street gangs in the Stockton area, the "Westside Bloods" and "Taliban."   During the investigation, special agents teamed with CHP and Stockton Police officers to arrest 52 suspects and seize 22 illegal firearms, $12,000, and 41 pounds of marijuana.

The two gangs were illegally purchasing firearms and have been connected to  numerous armed robberies and shootings in the Stockton area, including a recent triple homicide. Several attempted murders and robberies were solved or circumvented as a result of the investigation.

“Members of these two street gangs have terrorized the Stockton community and escalated violence and the proliferation of illegal guns in the city,” said Attorney General Harris. “I want to thank our DOJ special agents and the dedicated officers of the Stockton Police Department and the California Highway Patrol for their incredible efforts in this case.” 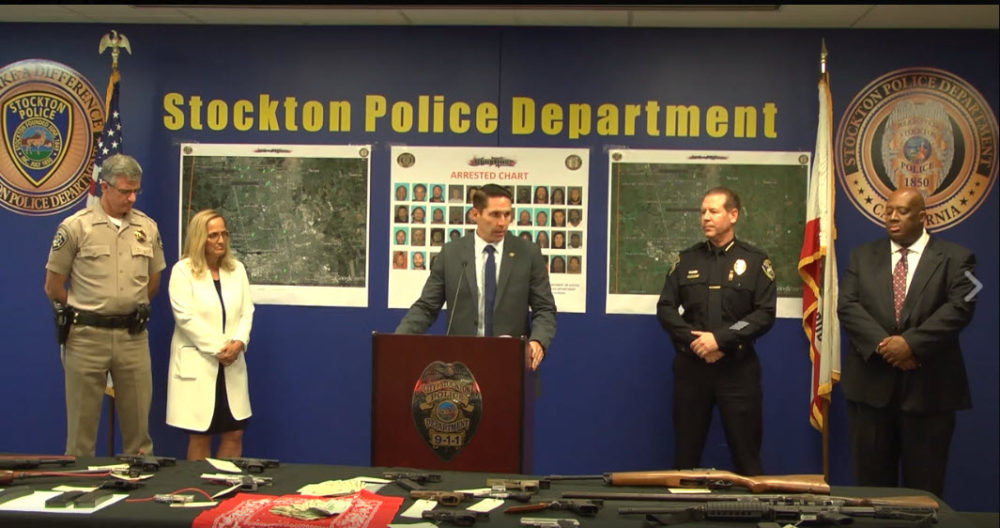 “We identified two groups, through an Operation Ceasefire analysis, who were significant security threats to our community based upon documented shootings, murders and attempted murders, in 2015,” said Stockton Police Chief Eric Jones. “I would like to thank everyone involved for assisting with the ongoing efforts to disrupt and dismantle criminal street gangs in and around the City of Stockton.”

Stockton and surrounding areas suffer from high rates of homicides and other gun crimes, with 44 homicides reported in Stockton in 2015 and 14 homicides to date in 2016.

"This operation by DOJ's Bureau of Investigation Special Operations Unit (SOU) is an example of why, in 2014,  the California Statewide Law Enforcement Association (CSLEA) pushed at the State Capitol for SOU funding," said CSLEA President Alan Barcelona. "We helped to secure more than $9 million dollars for additional SOU teams.  These teams take on the toughest of criminals and help to restore public safety.  It's a dangerous job and I have to imagine citizens who live in crime-filled neighborhoods are grateful when these types of operations have been conducted and those who have terrorized the streets are locked up."

In 2015, the California Department of Justice’s Bureau of Investigation, Special Operations Unit arrested 329 individuals and seized over $249,000 in cash, eight stolen vehicles, 146 pounds of methamphetamine, 20 pounds of heroin, 12.2 pounds of cocaine, 131 pounds of marijuana and 196 firearms (126 handguns, 38 rifles, 15 shotguns and 17 assault weapons).