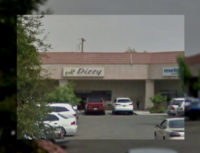 FRESNO – When California Alcoholic Beverage Control (ABC) agents entered Café Dizzy on North Cedar Avenue in Fresno, they didn’t find much food being served. They did, however, find a very large plateful of illegal activity taking place, including drug sales, illegal gambling, and lewd conduct such as lap dances.

During their four-month investigation with Fresno police, agents purchased cocaine, made sports bets, and played illegal card games.  They witnessed the after-hours sale of alcohol and lewd conduct.

During the investigation agents arrested two employees for bookmaking and engaging in an illegal sports book operation.   Approximately $8,000 in cash was seized along with other gambling and bookmaking paraphernalia.

Agents also arrested a Café customer who sold cocaine to undercover agents numerous times.  The patron was in possession of a loaded, stolen handgun and a loaded AR-15 style semiautomatic assault rifle.  Both weapons were seized from the suspect’s vehicle.

“Thankfully this investigation ended well, with no peace officer being hurt,” said California Statewide Law Enforcement Association (CSLEA) President Alan Barcelona.  “These types of investigations put agents and officers in harm’s way.  I have to imagine that area businesses and residents are relieved the place is shut down.”

On December 8, 2016, ABC agents posted a Notice of Revocation at Café Dizzy, making it illegal for Café Dizzy to sell alcohol to the public.  Café Dizzy is no longer in possession of an ABC license and appears to be closed with a “for rent” sign in its window.