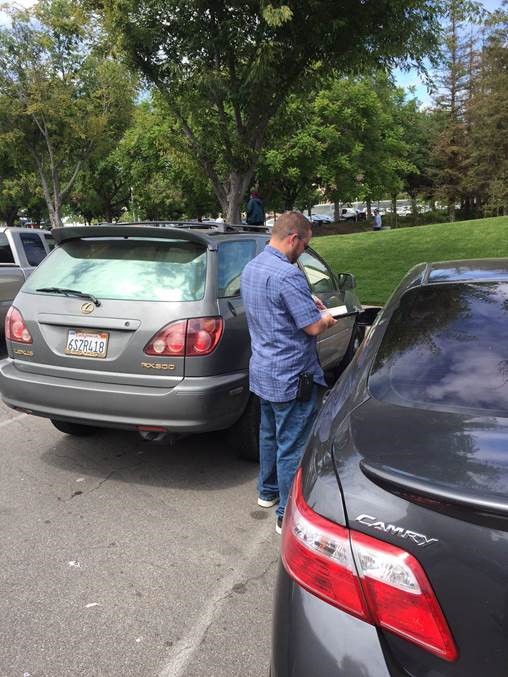 FRESNO – In an effort to curb the abuse of Disabled Person Parking Placards (DPPP)  throughout the state, on April 26, 2017, California Department of Motor Vehicles (DMV) investigators conducted an enforcement operation in downtown Fresno, near the Fresno County Superior Court and Fresno County Public Library.

Of the 121 people investigators found displaying a DPPP, 25 of them were doing so fraudulently and were issued misdemeanor citations.

In addition, investigators arrested one person for possession of a counterfeit California Driver License and providing false information to an officer while misusing a disabled placard.

“Recently the DMV has invited the media along to publicize the rampant abuse of DPPPs, educate the public on the proper use of a DPPP, and to advise the public that DMV investigators conduct these enforcement operations year-round,” said Kenny Ehrman, president of the Association of Motor Vehicle Investigators of California (AMVIC).  “In recent weeks, investigators have set up enforcement operations in San Jose, Los Angeles, San Diego and Indio.  It’s heartbreaking to see people who really need disabled parking forced to park a great distance away from their destination because someone is fraudulently using a DPPP.”

Offenders must appear in court to face possible fines that range from $250 to $1,000, depending on the jurisdiction.  While the misdemeanor offense will appear on their driver record, no points will be assessed because it is not a moving violation.

The level of reported or observed misuse of DPPP varies from area to area.  Most violations involve people using disabled parking placards issued to family or friends to avoid paying parking fees, as well as obtaining convenient and/or unrestricted parking.  California Vehicle Code Section 4461(b) (c) prohibits anyone from lending their placard, knowingly permitting the use of their placard or allowing anyone else to use it while they are not present.  In addition, a person shall not display a disabled person placard that was not issued to him or her or that has been canceled or revoked.

“It is important to point out that some qualifying disabilities are not visually apparent and allegations of misuse may be unfounded,” explained DMV Investigations Chief Frank Alvarez.  “The majority of Californians who apply for a DPPP have legitimate reasons for doing so.”

Anyone who thinks someone has been issued a Disabled Person Parking Placard in error or suspects placard misuse is urged to contact their local DMV Investigations office and submit a written complaint by filling out a Record of Complaint Form 172A. The complaint can be anonymous.