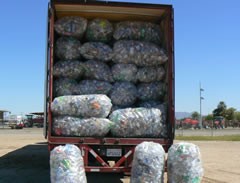 The sting, from March 13-17, 2017, was conducted by DOJ, CalRecycle and the California Department of Food and Agriculture (CDFA).  CDFA personnel worked the border checkpoint in Blythe, while DOJ special agents targeted a route near the border checkpoint that is often used by those trying to smuggle in thousands of pounds of used beverage containers for California’s Redemption Value Program (CRV).

“These guys bring in beverage containers from out of state for refunds that total tens of thousands of dollars, essentially stealing from the CRV program that we all pay into when we purchase most beverages,” said California Statewide Law Enforcement Association (CSLEA) President Alan Barcelona.   “It’s a big problem and it is stealing from the State of California and those of us who live here.”

On March 16, DOJ special agents, who were set up on a route that bypasses the CDFA checkpoint, witnessed a semi-truck, found to be importing used beverage containers from Parker, Arizona arrive in Blythe via Agnes Wilson Road. DOJ specialagents contacted Anthony Sanchez, 56, of Tucson, Ariz., and discovered his trailer filled with 7,675 pounds of used beverage containers with a potential CRV refund value of $9,636.79. Sanchez also presented a fraudulent Bill of Lading and did not have an Imported Material Report, required for anyone who transports used beverage containers into California.

Two days earlier, CDFA personnel at the border checkpoint in Blythe, detected a fraudulent Imported Material Report and false Bill of Lading provided by Balmore Alvarado, 49 of Chino, as he entered California from Arizona.   An inspection of Alvarado’s trailer revealed 7,020 pounds of used beverage containers with a potential CRV refund value of $10,275.85.

Both drivers face charges of felony recycling fraud, attempted grand theft, filing a false or forged document, and conspiracy. If convicted, the men could be subject to financial penalties and incarceration. The charges carry a sentence of between six months and three years.