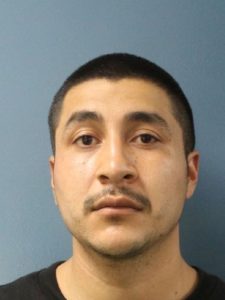 VISALIA – On October 12, 2017, a Tulare County jury convicted Roberto Saldana, 28, of Lindsay, of murder, attempted murder, weapons possession, conspiracy, and other gang crimes. The trial was a consolidation of three cases consisting of crimes spanning from 2008 to 2016.

“Criminal street gang members are dangerous individuals who threaten the safety of our communities,” said California Statewide Law Enforcement Association (CSLEA) President Alan Barcelona.  “They are also a danger to the law enforcement officers who investigate their criminal activity.  I am grateful for the brave agents and officers who investigated this violent and murderous gang member over the years, and that he faces a very lengthy prison sentence.”

Saldana was also found guilty of the July 20, 2008 murder of a perceived rival gang member in Lindsay.  Saldana strangled and stabbed the victim after gang slurs were exchanged.  He was convicted of second-degree murder with the special allegation that the crime was committed for the benefit of a criminal street gang and that a deadly weapon was used.   In this case, Saldana faces 16 years to life in prison.

In addition, Saldana faces 25 years to life in prison for the premeditated murder of an inmate at the Bob Wiley Detention Facility on July 27, 2016. Saldana and other gang members attacked the inmate as he was exiting the shower and beat and stabbed him multiple times.

Saldana has a prior felony conviction for possession of a sawed-off shotgun in 2013. He was on probation for that when he was arrested as part of Operation Red Sol.  He is scheduled for sentencing on November 17, 2017.   In total, Saldana faces a maximum sentence of 56 years to life in prison.