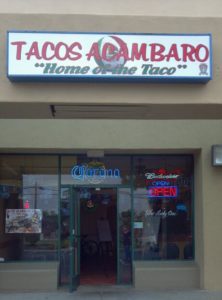 SALINAS – On, January 25, 2018, the California Alcoholic Beverage Control (ABC) suspended the liquor license of Tacos Acambaro in Salinas for 30 days. Effective immediately the business is prohibited from selling or serving alcoholic beverages until the suspension period is over.

The suspension follows an investigation by ABC agents assigned to the Target Responsibility for Alcohol-Connected Emergencies (TRACE) unit.  The TRACE investigation revealed that Abraham Requena, 20, along with several others under 21, were served or allowed to drink beer by manager Fernando Hernandez, 44, and waitress Ashley Cadena 21, both employees of the restaurant.

According to the investigation, on late January 29th or early January 30, 2017, Requena purchased alcohol, was served, and consumed alcohol at the premises. After leaving he was involved in a fatal car crash that took his life.   A KSBW8 report states: At the time of his death, his blood alcohol content was .27 percent, more than three times over the legal limit.

“ABC agents work to find the source, who provided alcoholic beverages to a person under-21 who later became injured or killed,” said California Statewide Law Enforcement Association (CSLEA) President Alan Barcelona.  “It is important to the families of those young people killed or injured, and to public safety, that those who provide alcohol to kids under 21, be held accountable.”

ABC is working with the Monterey County District Attorney’s office on a criminal case against the two employees for selling or furnishing alcohol to minors.

ABC agents worked with the Salinas police who first responded to the single vehicle crash. At the conclusion of the investigation, ABC filed an accusation against the business for serving alcohol to Requena and four other individuals under the age of 21.

TRACE is a program designed to determine the sources of alcohol to individuals under the age of 21 who are involved in car crashes, assaults, alcohol poisonings, overdoses or other incidents involving death or serious injuries.