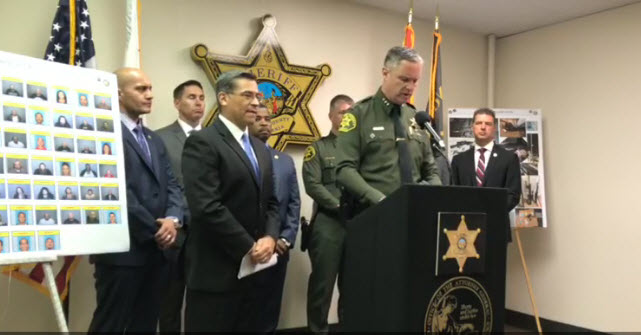 SANTA ANA – On May 2, 2018, Attorney General Xavier Becerra and Orange County Sheriff Sandra Hutchens announced the arrest of 85 suspects, the seizure of 36 firearms, including four assault weapons; 14 pounds of methamphetamine, three pounds of heroin; counterfeit money and the recovery of two stolen vehicles, all  a result of Operation Scarecrow, a three-month investigation of the Mexican Mafia and Sureno criminal street gang operating in Southern California.

Attorney General Becerra credited California Department of Justice special agents, along with CHP officers and Orange County Sheriff’s deputies, for their undercover and investigative work that helped to prevent violent crimes including attempted murder.   He thanked the team of the law enforcement officers for the dangerous work they performed in an effort to keep Californians safe.  “They deserve our gratitude,” said Becerra.

The 85 were arrested on various charges including assault with a deadly weapon, drug and weapon charges, conspiracy to bring drugs into a jail, forgery and fraud.

“There is no question when an operation like this is conducted, that streets and neighborhoods become safer,” said California Statewide Law Enforcement Association (CSLEA) President Alan Barcelona.  “These special agents, deputies and officers were investigating and arresting armed and violent individuals and I am grateful no one was hurt.”