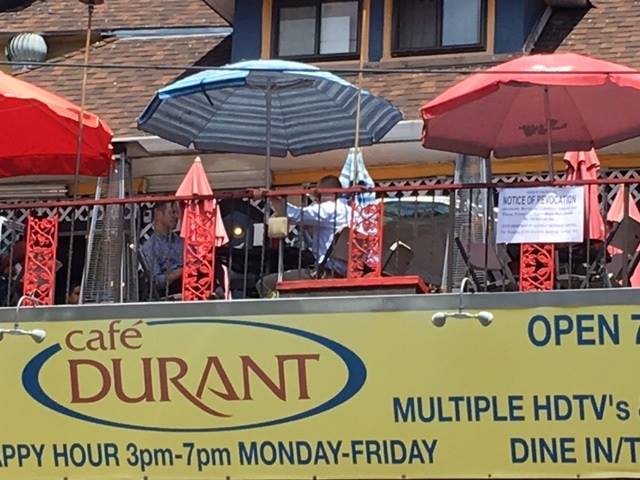 BERKELEY - On July 19, 2018, agents of the California Department of Alcoholic Beverage Control (ABC) posted a Notice of Revocation at “Café Durant” in Berkeley because alcohol was sold to customers who were under 21-years-old on multiple occasions.

The revocation is the result of three separate investigations conducted by ABC agents and the Berkeley Police Department that found the business was selling alcoholic beverages people under 21.  Three separate accusations, all alleging the sale of alcoholic beverages to people under 21, were filed against the business within an eight-month period.

Following the first accusation, the licensee agreed to a $3,000 fine instead of a 15-day suspension.

The second accusation alleged that the premises sold alcoholic beverages to; or permitted as many as 16 people under the age of 21 to consume alcoholic beverages in the licensed premises between February 23, 2017 and March 03, 2017.  The licensee agreed to a 25-day suspension of the ABC license.

The license has been permanently revoked for that location and the sale, service, and consumption of alcohol at that business is no longer permitted.  No additional license may be applied for at that location for a minimum of one year from the date of the Department’s decision.

“Thank you ABC agents and Berkeley police for staying on top of this investigation,” said California Statewide Law Enforcement Association (CSLEA) President Alan Barcelona.  “Allowing those under 21 to purchase and consume alcoholic beverages is a recipe for trouble, including assaults, sexual assaults, DUIs, accidents, injuries and even death.  While not always highly visible, these agents are out undercover days, nights, weekends and holidays, working to keep us, and our young people, safe.”