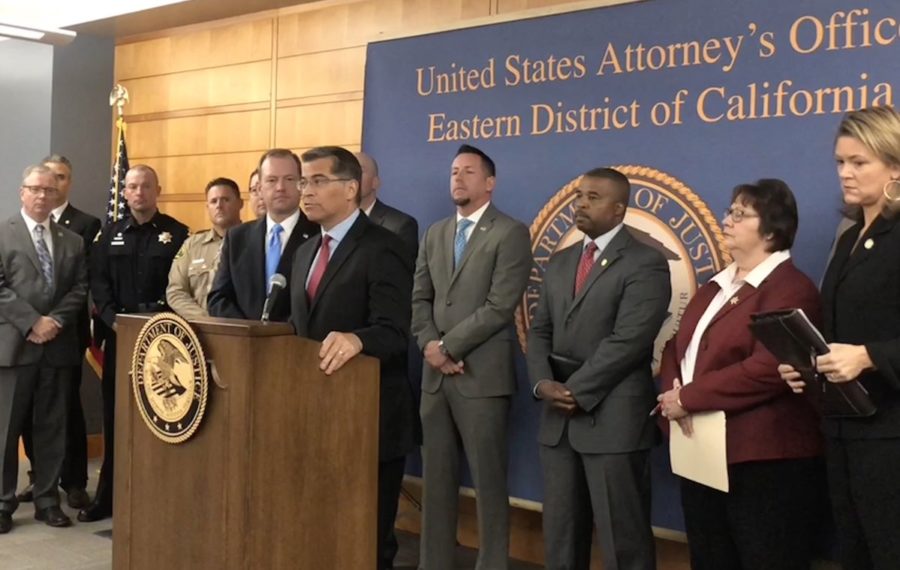 FRESNO– On August 31, 2018, California Attorney General Xavier Becerra joined law enforcement leaders to announce the arrest of 25 suspects associated with MS-13 gang in California. The arrests are part of a multi-agency operation, known as Blue Inferno, that has resulted in the arrest of multiple individuals in California and other states.

The months-long investigation began after 14 murders occurred in or around the City of Mendota, many of which were believed to be connected to MS-13 drug trafficking. Investigators found evidence of broad criminal activity, including murder, assault, firearms possession, and drug trafficking activity.  According to the Attorney General’s Office, the intelligence obtained during this investigation has helped solve several homicides and prevent violent crimes throughout the United States and abroad.

“This is excellent work by a team of local, state and federal law enforcement officers, including the California Department of Justice special agents,” said California Statewide Law Enforcement Association (CSLEA) President Alan Barcelona.  “It is important to say thank you for helping to stop violent crime in our communities and thank you for your bravery as you investigate and take into custody, these violent suspects.”

“When you terrorize communities, you must pay the price,” said Attorney General Becerra. “Today’s announced operation will lead to the vigorous prosecution and, I believe, conviction of violent criminal gang members. Operation Blue Inferno is a successful display of the dedication and hard work of our combined law enforcement personnel. We will continue working alongside our federal and local law enforcement partners to ensure safety and security for every California family.”

U.S. Attorney McGregor W. Scott stated, “The operation leading to today’s arrests reflects the incredible teamwork between our federal, state, and local law enforcement partners, and our shared commitment to keeping our communities safe from violent criminal gangs like MS-13. This investigation had impacts not only in Fresno County, but across the state and country as we were able to provide information and leads to law enforcement in Los Angeles, Nevada, Texas, New York, and elsewhere to help prevent and solve serious crimes, including murder. Criminal enterprises like MS-13 will not be tolerated in any of our towns, no matter how small.”

The Special Operations Unit is a collaborative investigative effort between the California Department of Justice and California Highway Patrol that provides statewide enforcement to combat violent career criminals, gangs, and organized crime groups, along with intrastate drug traffickers.