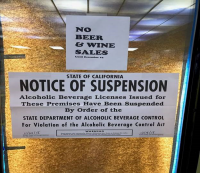 SANTA BARBARA -California Alcoholic Beverage Control (ABC) agents are doing their part to target under age drinking in the city and county of Santa Barbara, posting a Notice of Suspension at a convenience store and conducing decoy operations at businesses that sell alcohol.

On November 29, 2018, ABC agents posted a Notice of Suspension at Summit Gasoline, prohibiting the store form selling alcohol for 21 days.  The suspension is the result of selling alcohol to someone under-21 in 2017 and, again, in 2018.  Santa Barbara police officers assisted ABC agents in decoy operations at this location.

On November 30th, ABC agents and Santa Barbara County Sheriff's deputies conducted a shoulder tap operation in which a person under 21 asked more than 100 people at seven different locations to purchase alcohol.  The decoy's job is to make it very clear he/she is underage but has money to pay for it.  In the operation, three people were cited for furnishing alcohol to the decoy.  Two individuals were cited for violation of resisting, delaying and obstructing an investigation and another was busted for being a felon in possession of pepper spray.

Not finished yet, on December 1st, ABC agents and deputies sent an underage decoy into 15 different businesses that sell alcohol in Goleta and Isla Vista.  Clerks at four locations sold an alcoholic beverage to the decoy and were cited.

"Any parent who has young adult children is likely very grateful for the work ABC agents do to keep alcohol from those under 21," said California Statewide Law Enforcement Association (CSLEA) President Alan Barcelona.  "Underage drinking leads to some very unfortunate, if not deadly, consequences.  We can work to cut down on the number of DUI accidents, sexual misconduct or crimes, and assaults among young people by making sure alcohol is not a part of their lives."