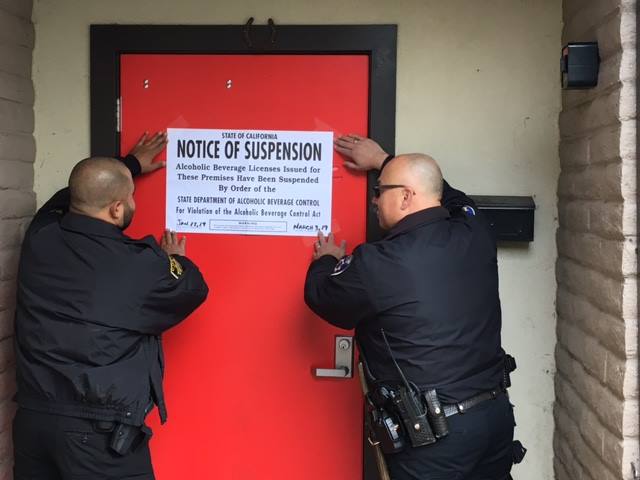 LIVERMORE -  On January 17, 2019, California Department of alcoholic Beverage Control (ABC) agents posted a Notice of Suspension at The Venue bar and lounge in Livermore, prohibiting the business from selling and serving alcohol for 45 days.

The 45-day suspension is the result of an investigation conducted by ABC agents and the Livermore Police Department.  The investigation concluded that The Venue was conducting an ongoing disorderly operation of business.   From April 2017 through June 2018, there were repeated calls for service for Livermore police officers to respond to incidents such as fights, assaults, public drunkenness and disturbing the peace.

“When a place of business has a premise history with a police department that involves repeated calls for help with situations that could possibly be avoided, it causes a big drain on response time for other needs,” said California Statewide Law Enforcement Associations (CSLEA) President Alan Barcelona. “Thank you to ABC agents who work with local law enforcement officers to change that situation and help to make the community safer.”

In addition to the business being operated in a continuous disorderly fashion, agents and officers allege the sale of alcoholic beverages to customers under 21 years of age.

Following the suspension, The Venue will also be required to stop the sale, service and consumption of alcoholic beverages at 12:30 a.m. each day of the week and provide adequate, state-licensed security while the privileges of the ABC license are being exercised.  The license will than be placed on probation for three years. ABC could move to permanently revoke the business’ license if the licensee allows similar levels of disorderly activity to occur at any time during the three-year probationary period.