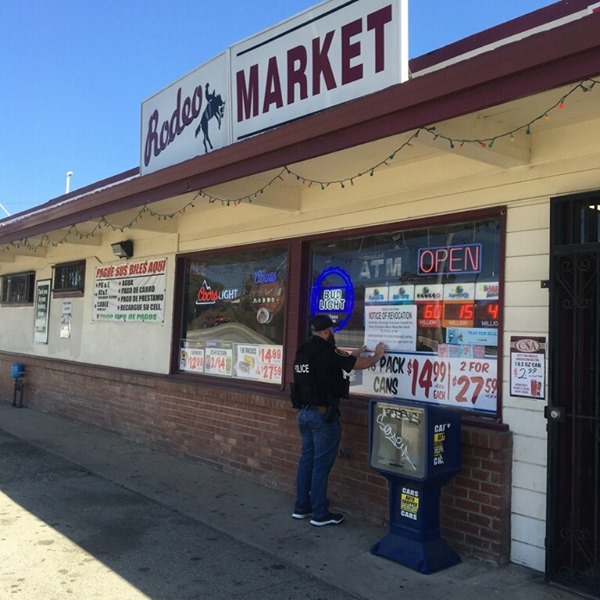 SALINAS - On October 1, 2019, California Department of Alcoholic Beverage Control (ABC) agents posted a Notice of Revocation at the Rodeo Market on Sherwood Drive in Salinas. Effective immediately alcohol sales at the location are prohibited.

The revocation is based on ABC accusations against the business, which has been licensed since July 13, 2015. Three accusations were filed, the two most recent accusations were appealed to the ABC Appeals Board.  The Board upheld ABC’s findings and disciplinary action on both cases.

The first accusation was filed after the Rodeo Market sold alcohol to a minor decoy on August 24, 2015 during an operation conducted by ABC agents.  That action resulted in a $3,000 fine in lieu of a 15-day suspension of the license.

The second accusation was the result of multiple visits from May to June 2017. ABC agents witnessed the sale of alcoholic beverages to a minor, a violation of the California Business and Professions Code.  Agents also discovered two illegal slot machines and obtained payouts, and were sold counterfeit merchandise possessed on the premises, both violations of the California Penal Code.

The third accusation was filed after the Rodeo Market sold alcohol to a minor decoy on December 31, 2017 during an operation conducted by ABC agents.

“ABC licensees have a responsibility to their communities and customers to follow the letter of the law when it comes to selling alcohol,” said California Statewide Law Enforcement Association (CSLEA) President Alan Barcelona.  “Lives are put at risk when alcohol is sold to those under 21.  In addition, illegal activity inside a business leads to a certain degradation of a neighborhood.   Thank you to the ABC agents who investigated the illegal activities inside this particular market.”