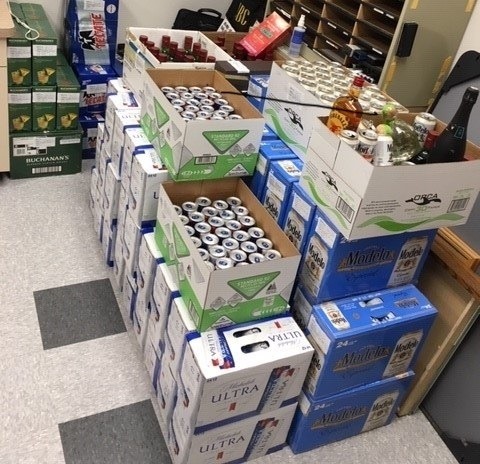 BAKERSFIELD -  On December 6, 2019, The California Department of Alcoholic Beverage Control (ABC) announced that ABC agents and Kern County Sheriff’s deputies shut down a Bakersfield banquet hall that was illegally selling alcoholic beverages without a license.

On November 15, 2019, ABC agents from the Bakersfield District Office and the Department’s Alcohol Policing Partnership (APP) Unit, along with the Kern County Sheriff’s Office (KCSO), conducted an operation at 1430 Weedpatch Highway in Bakersfield.

ABC agents issued a citation to the person operating the venue for the sales of alcohol without a license, the sale of goods without a valid seller’s permit and failure to file a tax return.  ABC agents seized more than 50 cases of beer and more than 50 bottles of distilled spirits.  Based on their prices, there was an estimated $15,000 plus profit on alcohol sales alone, not including entrance fees.

“This type of investigation is a step in protecting our young people who are not old enough to legally purchase alcoholic beverages,” said California Statewide Law Enforcement Association (CSLEA) President Alan Barcelona. “In addition, it protects community members who might encounter underage drinkers out on the roadways.”