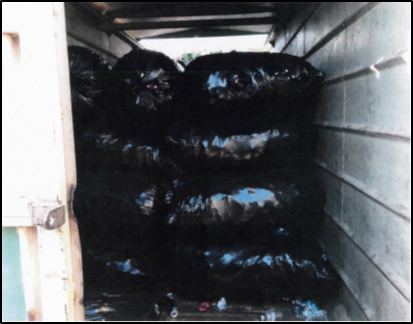 The arrests were the result of a four-month investigation into a multi-million-dollar recycling fraud operation that stretched from Nevada and Arizona to Los Angeles County.

The suspects are accused of smuggling out-of-state empty beverage containers into California to defraud the state’s Beverage Container Recycling Fund out of more than $2 million. Since consumers in Nevada and Arizona do not pay California Redemption Value (CRV) deposits on their beverage purchases, those containers are not eligible for CRV redemption funds.

“Our state’s recycling program is subsidized by our consumers and gives back to Californians who take conscious action to recycle,” said Attorney General Xavier Becerra. “We won’t allow cheaters to defraud our publicly funded recycling programs for their selfish gain. My office will continue to hold perpetrators accountable.”

Through their investigation, California Department of Justice special agents learned empty beverage containers from Nevada and Arizona were being illegally transported to Los Angeles-area self-storage facilities before being fraudulently redeemed at 15 local recycling centers, including Yulissa Recycling in Pacoima.

“Kudos to those involved in the surveillance, execution of search warrants and the arrests of those individuals suspected of ripping off California’s beverage container recycling fund,” said California Statewide Law Enforcement Association (CSLEA) President Alan Barcelona.  “This fund is for those who have paid CRV deposits when purchasing their beverages.  Attempting to recycle out of state containers for money in California is stealing.”

From January 13 -17, 2020, special agents executed search warrants and seized 17,669 pounds of aluminum, 7,554 pounds of plastic, and 2,430 pounds of glass empty beverage containers with a potential redemption value of $38,899. Based on evidence and interviews, the scheme is estimated to have defrauded the California Redemption Value fund out of more than $2 million.

The 11 defendants arrested and charged with felony recycling fraud, conspiracy, and grand theft are:

Upon conviction, the charges carry a potential sentence of six months to three years behind bars in addition to fines, court-ordered restitution, and possible loss of driver’s license and/or vehicle.