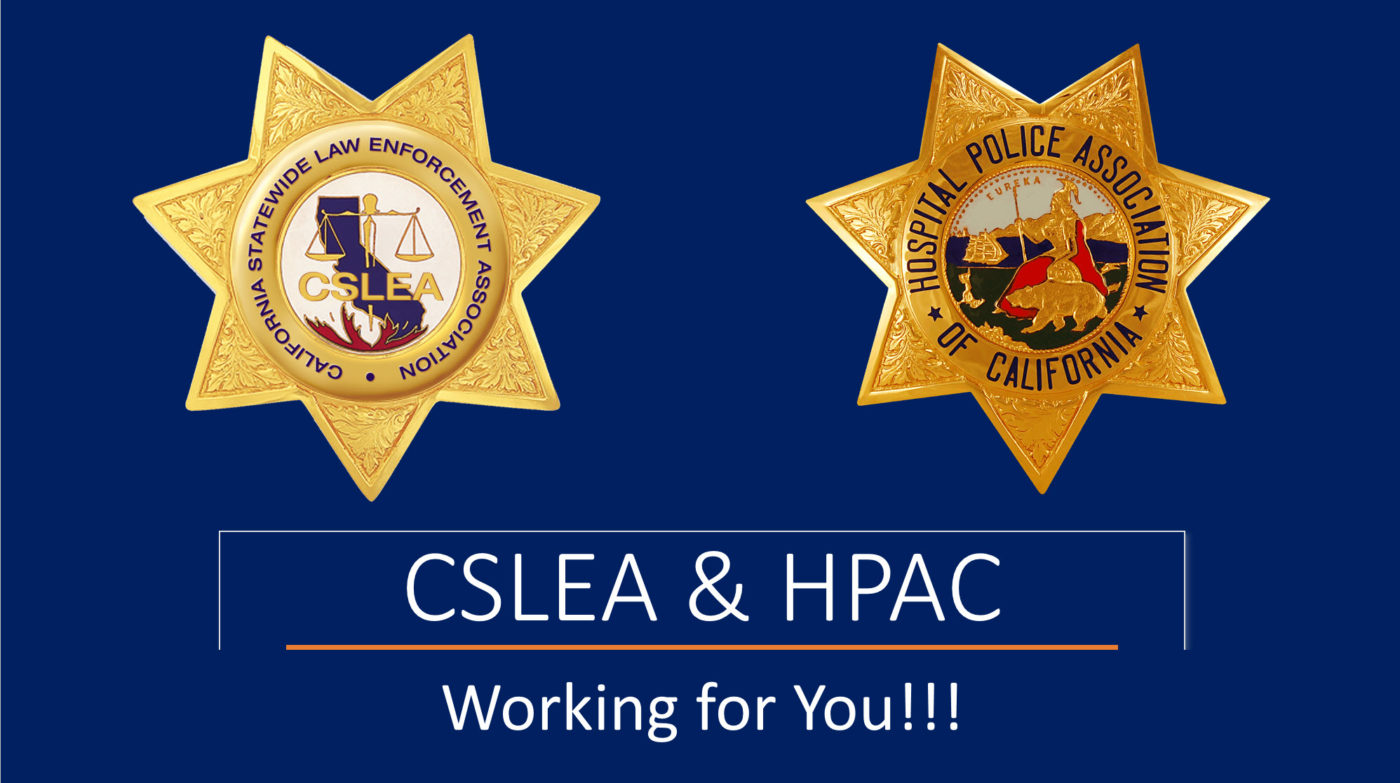 On December 10, 2019, CSLEA and HPAC representatives met with newly appointed Department of State Hospitals Office of Protective Services Chief David Starnes.  The meeting was primarily to meet him, introduce union representatives, and discuss issues that impact the bargaining unit 7 employees at DSH.

Most recently, CSLEA and HPAC representatives met with Chief Starnes on January 28, 2020.  CSLEA and HPAC presented numerous issues impacting CSLEA/HPAC members and discussed certain issue in more detail.  The following are some items that were discussed at the meeting.

CSLEA and HPAC look forward to working with Chief Starnes and DSH in resolving many long-standing issues.

In recent months, CSLEA has had a number of favorable decisions on behalf of its HPAC members.  These include the following:

On November 19, 2019, the State Personnel Board modified a decision by Administrative Law Judge Bruce Monfross whereby reducing Coalinga State Hospital HPO Paul Alejo’s Dismissal to a three-month suspension.  As a result, the Board ordered Officer Alejo back to work and he was owed more than three-months of backpay and benefits.

DSH dismissed Officer Alejo on May 3, 2019 based on allegations he was dishonest, insubordinate, discourteous, and negligent because he failed to inform his supervisors that his driver license was suspended, failed to timely attend a meeting, and failed to notify supervisors of two traffic citations (outside law enforcement contact).  Officer Alejo asserted that he was unaware of the suspension until he was notified by a supervisor, and he believed he timely attended the meeting with supervision.

However, the State Personnel Board determined that dismissal was not the just and proper penalty in this case.  After review of Judge Monfross’ factual conclusion regarding the allegations, the Board modified the discipline from a dismissal to a three-month suspension.  The Board cited Officer Alejo’s 14- year work history, his emotional stress, his demonstration of remorse and recognition of his mistakes, and the Department’s failure to prove dishonesty and insubordination as the reasons to modify the discipline.

On January 7, 2020, Los Angeles County Superior Court Judge James Chalfant ruled in favor of CSLEA and granted a Writ of Mandate requiring DSH to comply with the Public Safety Officers’ Procedural Bill of Rights (POBR) and allow a DSH Investigator to review and respond to adverse comments maintained in so-called confidential files.

In mid-2018, the DSH Investigator was served with a Letter of Instruction after he was the subject of an investigation. Upon the issuance of the letter, CSLEA Supervising Counsel De La Riva pursued the revocation of the letter as well as access to the “adverse comments” made against the Investigator upon which the entire investigation was based. Approximately one month later, DSH revoked the letter however insisted that the investigator was not entitled to access the adverse comments made against him.

In December 2018, CSLEA filed a Petition for Writ of Mandate in Los Angeles County Superior Court to compel DSH to comply with POBR.  POBR is represented in Government Code sections 3300, et. seq. and provides certain safeguards for peace officers including the right to review and respond to adverse comments made against them which are entered into their personnel files which is specifically allowed under Gov. Code sections 3305 and 3306.

This issue was originally litigated by CSLEA Chief Counsel Kasey Clark in 2002, in the case of Sacramento Police Officers Assn. v. Venegas. In the current case, DSH insisted that investigations that do not lead to adverse actions do not affect DSH’s personnel decisions and that the comments are maintained in confidential files. Therefore, it would not allow the investigator the requested access.

The Court verified that that comments which are maintained by the department have the potential to create an adverse impression on future personnel decisions. Further, because the contents of personnel files may be disclosed under certain circumstances (i.e., Pitchess Motion), it is important to allow the officer to provide his/her rebuttal to be attached to the comments, regardless of the outcome of the investigation.

On January 16, 2020, the State Personnel Board approved a decision by Administrative Law Judge Gregory Brown which provides in part that the Department of State Hospitals – Patton State Hospital discriminated against HPOs Brandon Robinson and Trevion Kennard. As a result, the judge ordered DSH to return the HPOs to full active duty and ordered that the HPOs be given back pay and benefits as well as interest.

The HPOs, with CSLEA’s assistance were forced to file discrimination complaints against DSH/PSH in April 2019. The HPOs suffer from a skin condition which qualifies as a disability under state and federal law and which inhibits their ability to shave. The officers requested an accommodation in December 2018, to work with trimmed beards. PSH informed the officers that their duty statement states they may be required to wear a respirator. Under Cal OSHA regulations, an individual who has a beard may not be able to form a proper seal in order to be fit tested to wear a mask. PSH concluded that because the officers could not form a proper seal on a respirator because of their beards, they could not be fit tested and therefore could not wear a respirator. As such, they would not be able to perform an essential function of their position. Robinson and Kennard were then taken off the work schedule, and forced to deplete their leave banks and ultimately, they were placed on unpaid leave.

After a three-day State Personnel Board hearing, the judge concluded in part that wearing a respirator cannot be an essential function of the HPO position. Therefore, PSH should have accommodated Robinson and Kennard by continuing to allow them to work with beards. By failing to do so, DSH/PSH wrongfully denied Robinson and Kennard their employment based on their disability.

*Why Union Membership is Imperative

“CSLEA proudly and successfully represented the HPO members in the cases described above,” said HPAC President Luis Jimenez.  “These cases can take time and involve much legal work. No one anticipates issues with management that lead to investigations, suspensions or dismissals, but it happens, and that’s why union membership is imperative.  A non-member would not be eligible for representation in an administrative investigation or civil suit.  If you are not a union member, consider signing up.  CSLEA membership is nothing short of career insurance.”